The Los Angeles Clippers and the Chicago Bulls duke it out at the United Center on Friday night.

The Los Angeles Clippers have been in pretty good form lately as they've won five of their past eight games and they will be looking to stay hot after taking down the Timberwolves in a 119-112 road win on Wednesday. Kawhi Leonard led the team with 36 points, eight rebounds and five assists, Lou Williams added 27 points off the bench while Reggie Jackson chipped in with 15 points. As a team, the Clippers shot 50 percent from the field and 12 of 23 from the 3-point line as they started slow and fell behind by as many as 13 points, before taking over in the third quarter where they outscored the Timberwolves by 33-20. Paul George did play in this game and has been ruled out for Friday.

Meanwhile, the Chicago Bulls have been in rough shape lately as they've lost six of their past nine games, but they will be hoping to build some momentum after rolling past the Pelicans in a 129-116 home win on Wednesday. Zach LaVine drained nine 3-pointers on his way to 46 points on 17 of 25 shooting, Coby White drained eight 3-pointers to finish with 30 points while Danzel Valentine chipped in with 16 points. As a team, the Bulls shot a sizzling 59 percent from the field and 25 of 47 from the 3-point line as they looked to be in trouble after trailing by eight points, before they took over in the third quarter where they outscored the Pelicans by an amazing 40-14.

The Clippers played well to come back against the pesky Timberwolves in their last outing, but they might not get away with another slow start against this Bulls team who have suddenly caught fire in their last game. This could be a close one, but I'm still sticking with the Clippers who are 10-4 ATS in the last 14 meetings in Chicago. 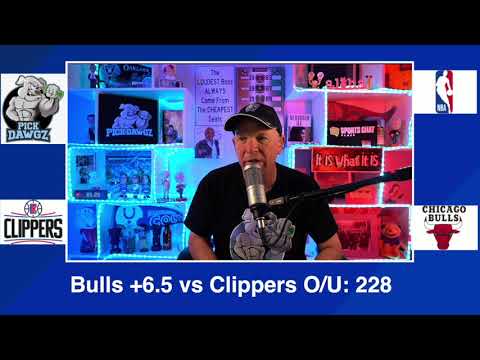