The Brooklyn Nets and the Detroit Pistons duke it out at Little Caesars Arena on Tuesday night.

The Brooklyn Nets have cooled off a bit lately as they've lost three of their last four games and they will be hoping to avoid a third straight defeat after getting routed by the 76ers in a 124-108 road loss on Saturday. James Harden led the team with 26 points, eight rebounds and 10 assists, Landry Shamet added 22 points off the bench while Joe Harris chipped in with 14 points. As a team, the Nets shot 44 percent from the field and 15 of 41 from the 3-point line as they hung in the contest, before getting blown out in the third quarter where they were outscored by 43-30. Kevin Durant sat out the game due to COVID-19 protocols and will be out until Friday, while Kyrie Irving is set to rejoin the lineup after sitting out on Sunday with a sprained finger.

Meanwhile, the Detroit Pistons have been in a real slump as they've lost nine of their past 11 games and they will be hoping to snap a four-game skid after falling short to the Lakers in a 135-129 double overtime loss on Saturday. Jerami Grant led the team with 32 points and six assists on 11 of 27 shooting, Josh Jackson added 28 points, eight rebounds and three assists on 11 of 20 shooting while Delon Wright chipped in with 15 points, eight rebounds and six assists. As a team, the Pistons shot 47 percent from the field and 16 of 42 from the 3-point line as they fought hard to send the game into overtime, before getting routed in the second overtime period where the Lakers closed the game on a 17-9 run to steal the game late.

The Nets will have to do without their best player in Kevin Durant until at least Friday, but they certainly have more than enough talent to make up for that as Irving will likely rejoin Harden in the lineup. The line seems a little hefty and I would probably go for it if it were any other team than the Pistons. With that being said, I'm taking the Nets to take care of business in this one. 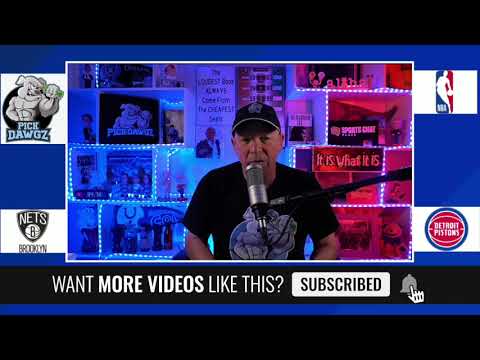