The Sacramento Kings play host to the Denver Nuggets at the Golden 1 Center on Saturday night.

The Denver Nuggets have been in great form lately as they’ve won six of their past eight games, but they will be hoping to bounce back here after getting routed by the Lakers in a 114-93 road loss on Thursday. Jamal Murray led the team with 20 points and five assists, Monte Morris added 16 points off the bench while Nikola Jokic scored just 13 points with 10 rebounds and six assists. As a team, the Nuggets shot just 39 percent from the field and eight of 28 from the 3-point line as they got off to a nice start and found themselves leading by 12 points at halftime, before getting blown out in the second half by 62-35 as they had no answer for the Lakers’ LeBron James who torched them for a triple-double.

Meanwhile, the Sacramento Kings have been in pretty good form themselves as they’ve won five of their past six games and they will be aiming for a third straight win after outlasting the Celtics in a 116-111 home win on Wednesday. De’Aaron Fox led the team with 26 points and 11 assists on nine of 17 shooting, Harrison Barnes added 24 points with six assists, Tyrese Haliburton scored 21 points off the bench, while Buddy Hield chipped in with 15 points. As a team, the Kings shot 45 percent from the field and 13 of 37 from the 3-point line as they rallied back from an 11-point deficit in the third quarter, before escaping with the narrow win as they held the Celtics scoreless in the final 1:05 of the game.

Jamal Murray is currently listed as questionable for Saturday with left knee soreness, so the Nuggets could be shorthanded. The King have quietly been playing their best basketball of the season and they will be full of confidence after coming back to beat the Celtics on Wednesday. The Nuggets have opened as favorites here, but they’re vulnerable with Murray and I just get the feeling the Kings will be good enough to take advantage here. The Nuggets are 0-4 ATS in the last four meetings overall and I think that trend continues as the Kings pull off the minor upset here. 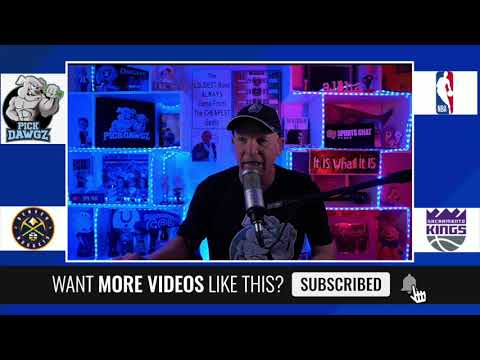