The Utah Jazz pay a visit to the Atlanta Hawks at the State Farm Arena on Thursday night.

The Utah Jazz have been in terrific form lately as they’ve won 12 of their past 13 games and they will be looking to stay hot after blowing past the Pistons in a 117-105 home win on Tuesday. Donovan Mitchell led the team with 32 points on 10 of 17 shooting, Mike Conley added 20 points with five assists while Bojan Bogdanovic chipped in with 18 points. As a team, the Jazz shot 46 percent from the field and 16 of 42 from the 3-point line as they dominated right from the start to take a 23-point halftime lead, before cruising in the second half which was a little more competitive.

Meanwhile, the Atlanta Hawks have been in a bit of a rut lately as they’ve lost four of their past six games and they will be hoping to snap a two-game skid after last night’s 122-116 loss to the Mavericks. John Collins led the team with 35 points and 12 rebounds on 16 of 21 shooting, Trae Young added 21 points with nine assists while Kevin Huerter chipped in with 21 points and 10 assists. As a team, the Hawks shot 50 percent from the field and 14 of 38 from the 3-point line as they scored 34 points in the second quarter to take the lead into halftime, before getting rolled in the second half where they allowed 69 points.

Head to head, the Jazz are 4-9 ATS in the last 13 meetings overall.

The Jazz have been one of the hottest teams in the league and they’re coming into this fresh off an easy win over the Pistons, while the Hawks just lose to the slumping Mavericks and will have to back up and play on zero days’ rest. The Hawks are only 4-11 ATS in their last 15 games playing on zero days’ rest and I think that trend continues as the Jazz should be too good here. 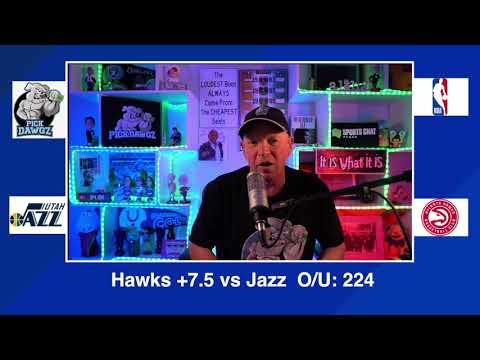