The Philadelphia 76ers pay a visit to the Charlotte Hornets at the Spectrum Center on Wednesday night.

The Philadelphia 76ers have been in terrific form lately as they’ve won eight of their past 10 games and they will be gunning for a fourth straight win after taking down the Pacers in a 119-110 road win on Sunday. Tobias Harris led the team with 27 points on 10 of 19 shooting, Ben Simmons racked up 21 points with six rebounds, seven assists and four steals while shooting nine of 12 from the field while Furkan Korkmaz chipped in with 17 points off the bench. As a team, the 76ers shot 48 percent from the field and eight of 26 from the 3-point line as they trailed by as many as 20 points, before taking over in the fourth quarter where they outscored the Pacers by 37-15 to win easily in the end. What made the win more impressive was that the 76ers did all this without their best player in Joel Embiid who was rested.

Meanwhile, the Charlotte Hornets have been on a nice run themselves as they will be aiming for a fourth straight win after outlasting the Heat in a thrilling 129-121 overtime road win on Monday. Malik Monk drained a career-high nine 3-pointers to lead the team with 36 points off the bench, Devonte Graham added 24 points with five assists, Cody Zeller and Gordon Hayward scored 19 points apiece while LaMelo Ball chipped in with 14 points and seven assists. As a team, the Hornets shot 45 percent from the field and a sizzling 21 of 41 from the 3-point line as they closed the fourth quarter on a 12-2 run to force overtime where they ran away with it.

The 76ers will have taken so much confidence from their comeback win over the Pacers in their last outing and they will be back to full strength as Embiid is likely to return in this one. The Hornets come into this one with plenty of momentum as well after beating the Heat in overitme, but I'm sticking with the 76ers who are 5-0 ATS in the last five meetings in Charlotte. 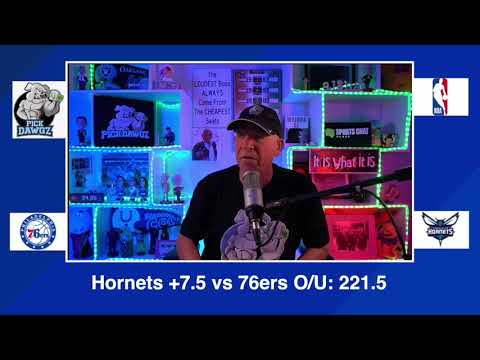