The Toronto Raptors and the Orlando Magic do battle once again at the Amway Center on Tuesday night.

The Toronto Raptors have been in a bit of a rut as they’ve lost four of their last seven games, but they will be looking to build some momentum after putting a halt to a three-game skid with a 115-102 home win on Sunday. Pascal Siakam led the team with 30 points, 10 rebounds and three assists, Kyle Lowry added 12 points with 15 assists while Terrence Davis chipped in with 12 points on five of 11 shooting. As a team, the Raptors shot 45 percent from the field and 12 of 39 from the 3-point line, but this win was about their defense as they set the tone by holding the Magic to just 15 points in the first quarter, before leading by as many as 22 points in a dominant win.

Meanwhile, the Orlando Magic have been in a serious slump as they’ve lost 11 of their past 13 games and they will be hoping to avoid a third straight defeat after Sunday’s blowout loss to the Raptors. Cole Anthony led the team with 16 points and six assists, Nikola Vucevic added 15 points with 14 rebounds and four assists while Aaron Gordon chipped in with 14 points and three assists. As a team, the Magic shot just 40 percent from the field and 13 of 36 from the 3-point line as they were always fighting an uphill battle after a slow start to the game. Evan Fournier had a night to forget as he scored just 11 points on two of 12 shooting.

The Raptors really needed a win to get their season back following a three-game skid and they looked impressive on Sunday, but now they have to try and repeat that performance on the road as this matchup shifts to the Amway Center. It’s always tough to beat the same team twice in a row, but it’s hard to feel too confident about the slumping Magic who are just 1-4 ATS in their last five home games. The Raptors are 7-0 ATS in the last seven meetings overall and I think that trend continues here as the Raptors should be too good once again. 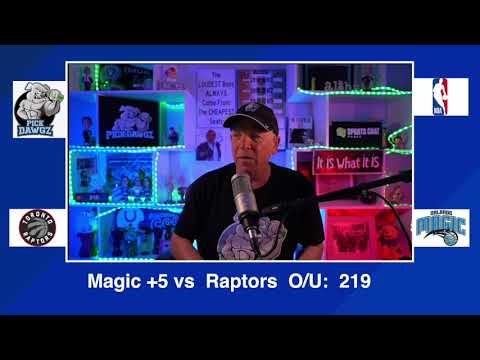