The Los Angeles Clippers pay a visit to the Barclays Center to do battle with the Brooklyn Nets on Tuesday night.

The Los Angeles Clippers have been on a tear lately as they’ve won 10 of their past 11 games and they will be looking to build on a three-game win streak after blowing past the Knicks in a 129-115 road win on Sunday. Kawhi Leonard led the team with 28 points on eight of 15 shooting, Reggie Jackson added 18 points on six of 12 shooting while Paul George chipped in with 17 points, eight rebounds and five assists. As a team, the Clippers shot a healthy 54 percent from the field and 17 of 38 from the 3-point line as they poured in 37 points in the second quarter to take the lead at halftime, before taking control of the game in the third quarter where they outscored the Knicks by 35-26. Nicolas Batum sat out with a left groin injury and is currently listed as questionable for Tuesday.

Meanwhile, the Brooklyn Nets have been in great form lately as they’ve won eight of their past 11 games, but they will be looking to bounce back here after having their four-game win streak halted by the Wizards in a heartbreaking 149-146 road loss on Sunday. Kevin Durant led the team with 37 points, seven rebounds and six assists, Joe Harris drained eight 3-pointers on his way to 30 points while Kyrie Irving chipped in with 26 points and eight assists. As a team, the Nets shot a sizzling 56 percent from the field and 19 of 36 from the 3-point line as they dominated most of the game to lead by as many as 18 points, before watching the game slip through their fingers as they couldn’t get over the line despite leading by five points with 12.3 seconds remaining. Harris had a nice game of 30 points but was the culprit in the team’s loss as he turned the ball over with the team leading by two.

James Harden sat the Nets’ heartbreaking loss to the Wizards on Sunday with a left thigh contusion, but he is expected to return here which is a major boost for the Nets who will be eager to move on. The Clippers could once again be without Nicolas Batum in this one, but they’re nearly at full strength otherwise. The Clippers are 19-7 ATS in their last 26 road games and they’ve been the more consistent team, so I’m taking the Clippers to continue their hot form with another win here. 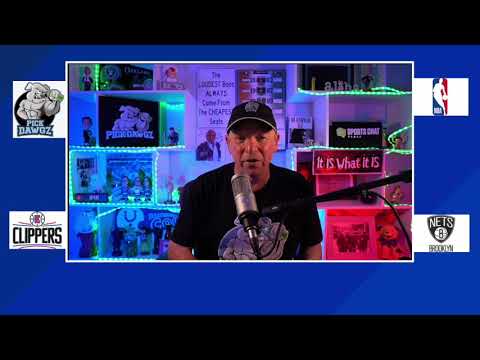