The Chicago Bulls play host to the New York Knicks at the United Center on Monday night.

The New York Knicks have been in a bit of a rut lately as they’ve lost four of their last five games and they will be hoping to bounce back after getting routed by the Clippers in a 129-115 home loss yesterday afternoon. Julius Randle led the team with 27 points, 12 rebounds and five assists, Isaiah Quickley added 25 points on nine of 16 shooting off the bench while RJ Barret chipped in with 23 points on nine of 14 shooting. As a team the Knicks shot 48 percent from the field and 10 of 27 from the 3-point line as they hung with the Clippers early on with 65 points in the first half, but they couldn’t keep up the pace in the second half as the Clippers ended up shooting over 54 percent from the field.

Meanwhile, the Chicago Bulls have been in a rut of their own as they’ve lost seven of their past 10 games and they will be hoping to arrest a three-game skid after falling to the Trailblazers in a heartbreaking 123-122 home loss on Saturday. Lauri Markkanen led the team with 31 points on 12 of 18 shooting, Zach LaVine added 26 points with seven rebounds and four assists while Coby White chipped in with 20 points and six assists. As a team, the Bulls shot 50 percent from the field and a sizzling 21 of 45 from the 3-point line as they rallied back from a 19-point deficit with 69 points in the second half, only to lose at the buzzer as the Trailblazers’ Damian Lillard drained the game winner on a broken play.

Head to head, the over is 7-3 in the last 10 meetings in Chicago and the Knicks are 4-1 ATS in the last five meetings overall.

The Knicks were surprising a few teams this season and they were in good form before dropping four of their last five, while the Bulls have really struggled with their long list of injuries. The Knicks are 4-1 ATS in the last five meetings overall and I’d probably take them in this spot if they weren’t playing on zero days’ rest, but with the Bulls having an extra days’ rest, I think LaVine and company can bounce back from their heartbreaking loss with a much-needed home win here. 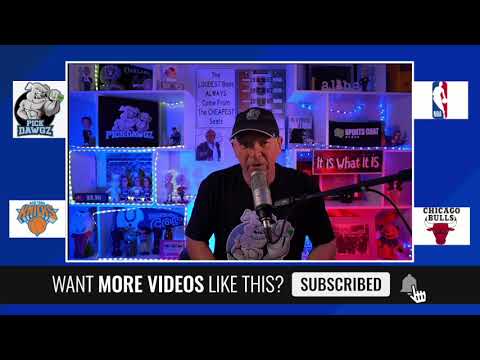