The Miami Heat play host to the Denver Nuggets at the American Airlines Arena on Wednesday night.

The Denver Nuggets look to have recovered from their slow start to the season as they’ve won nine of their past 12 games and they will be gunning for a fifth straight victory after outlasting the Mavericks in a 117-113 road win on Monday. Michael Porter Jr. led the team with a season-high 30 points on 10 of 18 shooting, Nikola Jokic racked up 20 points with 10 rebounds and four assists, JaMychal Green scored 17 points while Jamal Murray chipped in with 16 points on seven of 11 shooting. As a team, the Nuggets shot 50 percent from the field and 15 of 35 from the 3-point line as they set the tone with 70 points in an explosive first half to lead by 13 points, before having to rally in the fourth quarter where they outscored the Mavericks by 25-19 to escape with the narrow win.

Meanwhile, the Miami Heat have really been struggling as they’ve lost six of their past eight games and they will be hoping to snap a three-game skid after falling to the Nets in a 98-85 road loss on Monday. Bam Adebayo led the team with 26 points, 10 rebounds and five assists, Goran Dragic added 21 points with five assists while Kendrick Nunn scored 11 points on five of 17 shooting, but no other player finished in double figures. As a team, the Heat shot just 36 percent from the field and 11 of 43 from the 3-point line as they fought hard to take a one-point lead after three quarters, only to go ice-cold in the fourth quarter where they managed just 14 points as the Nets stole the game late.

Goran Dragic, Tyler Herro and Gabe Vincent are all listed as questionable for Wednesday while Jimmy Butler has been ruled out, so the Heat will once again be severely shorthanded. The Nuggets are a team on the rise after a slow start to the season and this just seems like an ideal spot for them to steal one against the Heat while they’re undermanned. The Nuggets are 6-2 ATS in the last eight meetings in Miami and I think that trend continues here as the Nuggets should get the job done here. 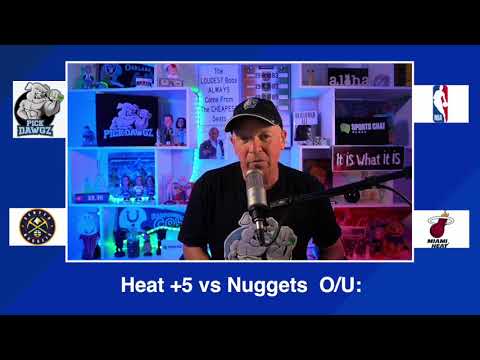