The Toronto Raptors pay a visit to the Indiana Pacers at Bankers Life Fieldhouse on Monday night.

The Toronto Raptors have been in great form as they’ve won five of their last six games and they will be aiming for a third straight victory after last night’s 107-102 road win over the Pacers. OG Anunoby led the team with 30 points, eight rebounds and five steals, Fred VanVleet added 21 points with four assists, Norman Powell added 20 points with six assists while Aron Baynes and Chris Boucher each scored 12 points. As a team, the Raptors shot 41 percent from the field and 15 of 35 from the 3-point line as they squandered an early 13-point lead, before rallying in the fourth quarter to escape with a narrow win on free throws down the stretch. Kyle Lowry sat out the game with a toe infection and is listed as doubtful for Monday.

Meanwhile, the Indiana Pacers have been in a bit of a rut as they’ve lost three of their last four games and they will be hoping to bounce back after last night’s narrow loss to the Raptors. Myles Turner led the team with 25 points and six blocks on eight of 12 shooting, Justin Holiday added 16 points with 10 rebounds, while Doug McDermott and Jeremy Lamb each scored 13 points. As a team, the Pacers shot just 40 percent from the field and 13 of 39 from the 3-point line as they held the Pacers to just 19 points in the third quarter to rally back from a 13-point deficit, only to fall just short as the Raptors poured in 30 points in the fourth quarter to escape with the win.

The Raptors will be delighted with last night's much-needed win over the Pacers, especially as they were able to get it done with one of their best players in Lowry while the Pacers will be kicking themselves. It's always tough to beat the same team twice in a row in their own building, especially against a well-coached team like the Pacers. With that being said, I'm taking the Pacers to get their revenge in this one behind big games from Sabonis and Brogdon. 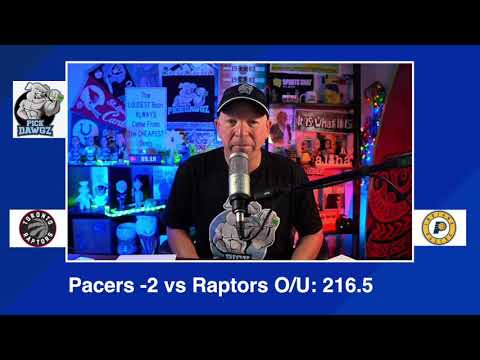