The Miami Heat and the Brooklyn Nets duke it out for the second time at the Barlcays Center on Monday night.

The Miami Heat have been in rough shape as they’ve lost five of their last seven games and they will be hoping to avoid a third straight defeat after falling just short to the Nets in a 128-124 road loss on Saturday. Bam Adebayo led the team with 41 points and nine assists, Goran Dragic added 19 points with seven assists while Duncan Robinson and Kendrick Nunn each scored 18 points. As a team, the Heat shot 47 percent from the field and 13 of 46 from the 3-point line as they struggled for most of the game and fell behind by as many as 18 points before pouring in 42 points in the fourth quarter to make it interesting in the end.

Meanwhile, the Brooklyn Nets have been in decent form as they’ve won five of their last seven games, but they will be feeling much better after securing their first win as a new team, by beating the Heat on Saturday night. Kevin Durant led the team with 31 points on 11 of 19 shooting, Kyrie Irving added 28 points with seven assists, Joe Harris scored 23 points while James Harden chipped in with 12 points, seven rebounds and 11 assists. As a team, the Nets shot 53 percent from the field and 19 of 37 from the 3-point line as they dominated the shorthanded Heat for most of the contest, before sealing the win with free throws down the stretch.

The Heat were able to put up a good fight against the revamped Nets on Saturday thanks to a monster night from Adebayo, but with so many key players still missing, they’re going to need more from other players to get one back. The Nets have their issues on the defensive end, but they are spoilt for choice on the offensive end and I think their Big Three will be too good in this matchup once again. The Heat will once again be without the services of Tyler Herro and Jimmy Butler, so I'm taking the Nets to take advantage with a win and cover here. 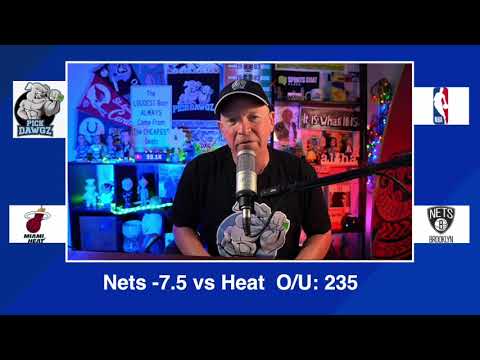