The Detroit Pistons play host to the Philadelphia 76ers at Little Caesars Arena on Saturday night.

The Philadelphia 76ers have been in great form as they’ve won four of their last five games and they will be gunning for a third straight victory after last nights 122-110 home win over the Celtics. Joel Embiid led the team with 38 points, 11 rebounds and three assists, Tobias Harris added 23 points with eight rebounds on 10 of 12 shooting while Ben Simmons chipped in with 15 points and 11 assists. As a team, the 76ers shot a healthy 55 percent from the field and 12 of 28 from the 3-point line as they trailed by three points at halftime, before taking control of the game in the third quarter where they outscored the Celtics by 42-28. Once again, the 76ers relied heavily on Embiid who delivered Furkan Korkmaz finished with just six points on two of nine shooting while Shake Milton finished with six points on two of seven shooting.

Meanwhile, the Detroit Pistons have been in a world of hurt as they’ve lost 12 of their first 15 games and they will be hoping to snap a three-game skid after falling painfully short to the Rockets in a 103-102 home loss last night. Jerami Grant led the team with 21 points, eight rebounds, three assists and three blocks, Wayne Ellington and Delon Wright each scored 18 points while Josh Jackson chipped in with 12 points and three blocks off the bench. As a team, the Pistons shot 37 percent from the field and 15 of 32 from the 3-point line as they fought hard to rally all the way back from a 20-point deficit, only to miss on two opportunities to win the game in the final seconds.

The Pistons have been in terrible form this season and they must be low on confidence after last night's one-point loss to the Rockets, while the 76ers have been in red-hot form and they will be looking to maintain their momentum after last night's impressive win over the Celtics. The 76ers are 10-1 ATS in the last 11 meetings overall and I think that trend continues as the 76ers should be too good for the slumping Pistons at this stage of the season. 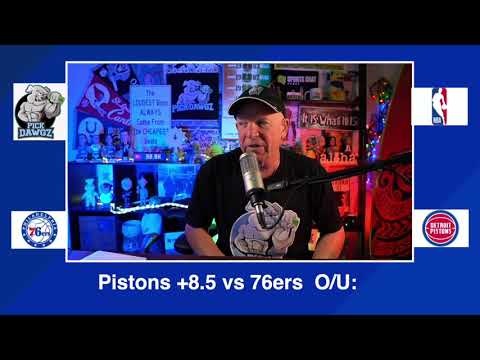