The Miami Heat invade the Barclays Center to do battle with the Brooklyn Nets on Saturday night.

The Miami Heat have love four of their last six games overall and they will be hoping to bounce back after last night’s 101-81 loss to the Raptors. Kendrick Nunn led the team with 22 points and five assists, Bam Adebayo added 14 points with eight rebounds and four assists while Goran Dragic chipped in with 13 points and four assists. As a team, the Heat shot 42 percent from the field and seven of 31 from the 3-point line as they clawed their way back from an early 19-point deficit to tie the game midway through the third quarter, only to get blown out in the fourth quarter where they managed just 17 points.

Meanwhile, the Brooklyn Nets have won nine of their first 17 games of the season, but they will be hoping to avoid a third straight defeat after last night’s 125-113 road loss to the Cavaliers, their second to them in three nights. Kyrie Irving led the team with 38 points and five assists, James Harden added 19 points with 11 assists while Jeff Green chipped in with 13 points off the bench. As a team, the Nets shot 48 percent from the field and 14 of 43 from the 3-point line as they hung in the contest until the Cavaliers broke away with 37 points in a third quarter ambush. Kevin Durant was rested last night but he is expected to be available on Saturday.

The Heat have really struggled with players missing games this season and we saw another example of that last night against the Raptors as they managed just 81 points. The Nets have gone through some major roster changes, but they will be eager to get in the win column after dropping their last two games against the Cavaliers. The Heat are capable of surprising everyone by pulling off the upset here, but the Nets should have too much firepower in this one, assuming that Kevin Durant is able to return for this one. Give me the Nets to eventually pull away for their first win as a new team. 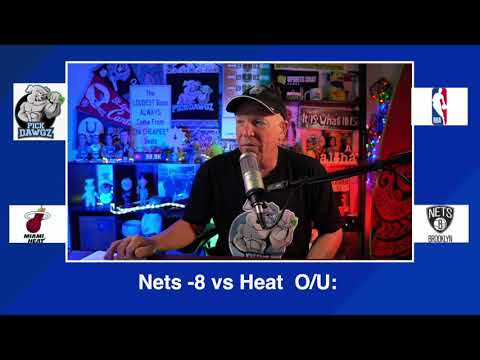