The Atlanta Hawks play host to the Detroit Pistons at the State Farm Arena on Wednesday night.

The Detroit Pistons have endured a rough start to the season as they’ve lost 10 of their first 13 games and they will be hoping to bounce back in this one after falling short to the Heat in a 113-107 road loss on Monday. Jerami Grant led the team with 27 points and six assists, Wayne Ellington drained seven 3-pointers on his way to 24 points, Derrick Rose scored 21 points off the bench while Mason Plumlee chipped in with 15 points on seven of 10 shooting. As a team, the Pistons shot 46 percent from the field and 13 of 37 from the 3-point line as they stormed out of the gates with 36 points in the first quarter to lead by as many as 19 points early, but they couldn’t keep up pace in the second and third quarters where the Heat outscored them by a combined 64-44.

Meanwhile, the Atlanta Hawks have been in a rut as they’ve lost six of their past eight games, but they will be looking to build some momentum after taking down the Timberwolves in a 108-97 home win on Monday. DeAndre Hunter led the team with 25 points on eight of 15 shooting, Clint Capela added 23 points, 15 rebounds and three blocks, Trae Young scored 20 points with 13 assists while Kevin Huerter chipped in with 17 points and eight assists. As a team, the Hawks shot 46 percent from the field and 11 of 28 from the 3-point line as they took down the Timberwolves despite committing 24 turnovers in a sloppy game.

The Pistons have been doing it tough this season and they will be looking for a much-needed win after getting stopped by the Heat on Monday. The Hawks have been in a rut themselves and they are just 1-7-1 ATS in their last nine games against a team with a losing record, so it’s hard to pick between these two teams. I wouldn’t be surprised at all if the Pistons pulled off the upset, but the Hawks won the last meeting by 128-120 back on Dec 28 and I’m expecting a similar result in this one. 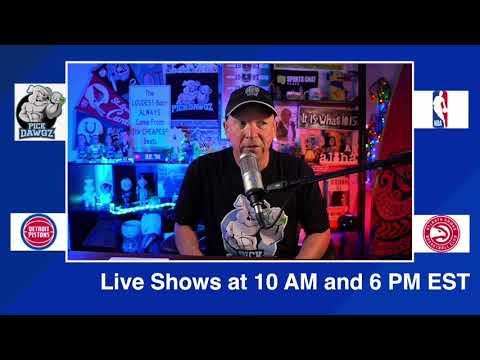