The Portland Trailblazers play host to the San Antonio Spurs at the Moda Center on Monday afternoon.

The San Antonio Spurs have been in nice form lately as they’ve won five of their past seven games and they will be looking to stay hot after taking down the Rockets in a 103-91 home win on Saturday. DeMar DeRozan led the team with 24 points and four assists, Dejounte Muray added 18 points with 10 rebounds and three assists while Jakob Poeltl chipped in with 13 points, 11 rebounds and three assists. As a team, the Spurs shot just 40 percent from the field and five of 24 from the 3-point line, but they were great on the defensive end as they held the Rockets to just 36 percent shooting from the field while forcing them into 22 turnovers.

Meanwhile, the Portland Trailblazers have been in great form lately as they’ve won five of their past six games and they will be looking to stay hot after outlasting the Hawks in a 112-106 home win on Saturday. Damian Lillard led the team with 36 points and seven assists, Gary Trent Jr. provided the spark off the bench with 18 points while Enes Kanter chipped in with 12 points, 15 rebounds and five blocks. As a team, the Trailblazers shot just 38 percent from the field and 15 of 44 from the 3-point line as they fell behind by seven points at halftime, before holding the Hawks to just 40 points in the second half to escape with the win. CJ McCollum scored 16 points before leaving Saturday’s game with a left foot sprain which rules him out for Monday.

The Spurs are almost back to full strength and they’ve really started to build nicely over their past seven games while the Trailblazers will be looking to keep their strong run going without their second leading scorer in McCollum who will miss time with a foot sprain. The Trailblazers are still deserved favorites in this one as they’re always so tough to beat at home, but the Spurs are 8-3 ATS in their last 11 road games and I think that trend continues here as they escape with the minor upset. Give me the Spurs in a close one. 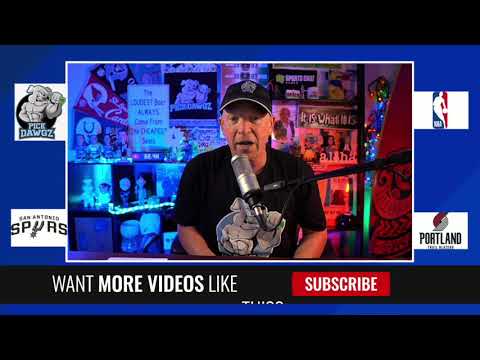