The Orlando Magic and the New York Knicks duke it out at Madison Square Garden on Monday afternoon.

The Orlando Magic have started the season red-hot as they won six of their first eight games, but they’ve since gone ice-cold as they will be hoping to avoid a sixth straight loss after falling to the new-look Nets in a 122-115 road loss on Saturday. Nikola Vucevic led the team with 34 points, 10 rebounds, seven assists and five steals, Terrence Ross added 23 points with three assists off the bench while Cole Anthony chipped in with 16 points and eight assists. As a team, the Magic shot 46 percent from the field and 14 of 46 from the 3-point line as they stuck with the Nets for the entire game, but in the end, they just couldn’t contain the Nets duo of Kevin Durant and James Harden who combined for 74 points. Still, the Magic were much more competitive in this loss than their other losses during this five-game skid.

Meanwhile, the New York Knicks have cooled off after a hot start to the season, but they will be looking to build some momentum after snapping a five-game skid with a 105-75 win over the Celtics last night. Julius Randle led the team with 20 points, 12 rebounds and four assists, RJ Barrett added 19 points with 11 rebounds, Isaiah Quickley scored 17 points with eight assists while Obi Toppin chipped in with 12 points. As a team, the Knicks shot 47 percent from the field and 12 of 31 from the 3-point line, but this win was all about their defense as they held the shorthanded Celtics to just 35 points in the first half, before restricting them to just 15 points in the third quarter to make it a complete blowout.

Head to head, the under is 4-0-1 in the last five meetings in New York and the Magic are 5-2 ATS in the last seven meetings overall.

The Magic have been in a serious rut lately, but they looked good in their loss to the Nets and are 14-6-1 ATS in their last 21 road games. It’s a similar story for the Knicks who were in a slump before snapping out of it with a 30-point blowout over the red-hot Celtics last night. The Magic will be keen to get back in the win column and I like their chances if Vucevic can have a big game, but the Knicks were impressive against the Celtics last night and I think they can carry that form into this one. Give me the Knicks to pull off the minor upset behind a big game from Randle. 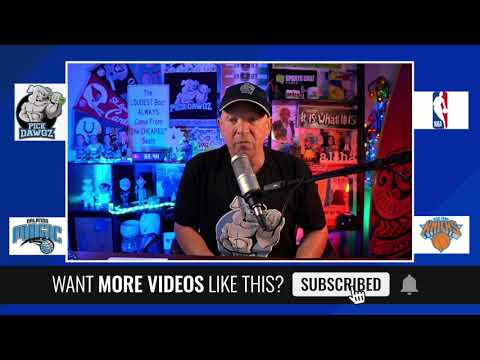