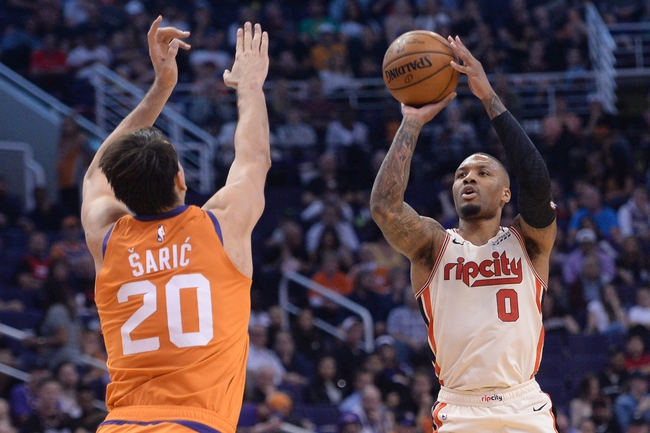 The Portland Trailblazers play host to the Phoenix Suns at the Moda Center on Tuesday night.

The Phoenix Suns have split their last 10 games, but they will be gunning for a third straight victory after taking down the shorthanded Bucks in an impressive 140-131 home win on Sunday. Devin Booker led the team with 36 points and eight assists on 13 of 17 shooting, Ricky Rubio racked up a triple-double of 25 points with 13 rebounds and 13 assists, Aron Baynes scored 24 points while Mikal Beasley chipped in with 21 points, 10 rebounds and three assists. As a team, the Suns shot a healthy 55 percent from the field and 19 of 43 from the 3-point line as they ambushed the Bucks in the first quarter with a season-high 47 points before leading by as many as 25 points in their best offensive performance of the season

Meanwhile, the Portland Trailblazers have been in rough shape lately as they've lost five of their last seven games and they will be hoping to snap a two-game skid after getting routed by the Kings in a 123-111 home loss on Saturday. Hassan Whiteside led the team with 19 points, 11 rebounds and three blocks, CJ McCollum added 19 points with six assists while Mario Hezonja chipped in with 16 points off the bench. As a team, the Trailblazers shot 47 percent from the field and 10 of 39 from the 3-point line, but they just left themselves too much ground to make up after allowing the Kings to explode for 77 points in the first half. Damian Lillard shot just four of 15 to finish with 12 points while Carmelo Anthony scored just eight points.

The Suns have been one of the streakiest teams all season, but they’ve sprung to life with a couple of wins on the trot and they will be full of confidence after taking down the shorthanded Bucks on Sunday. The Trailblazers have been in poor form lately and they’re running out of time with the playoffs just around the corner, so they will be keen to get back into the win column here. The Suns are really starting to build some nice momentum lately and they are 4-1 ATS in the last five meetings in Portland. This should be a close one, so I’m taking the Suns with the points in a game they could easily win outright.