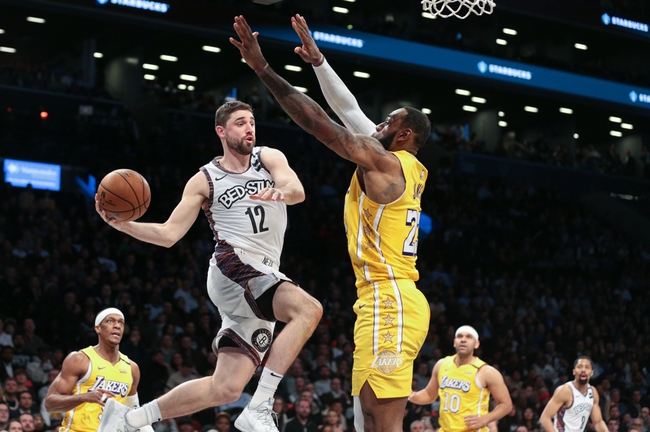 The Brooklyn Nets pay a visit to the Los Angeles Lakers at the Staples Center on Tuesday night.

The Brooklyn Nets have lost five of their last eight games, but they will be aiming for a third straight victory after sneaking past the lowly Bulls in a 110-107 home win on Sunday. Spencer Dinwiddie led the team with 24 points and six assists, Joe Harris and Caris LeVert each scored 23 points while DeAndre Jordan chipped in with 11 points, 15 rebounds, four assists and three blocks. As a team, the Nets shot 50 percent from the field and 11 of 30 from the 3-point line as they took a 13-point lead in the third quarter, before holding on for the narrow win after the Bulls cut the lead to just one with 0.4 seconds remaining.

Meanwhile, the Los Angeles Lakers have been playing their best basketball of the season as they've won 11 of their last 12 games and they will be gunning for a fifth straight victory after outlasting the Clippers in a 112-103 statement win on Sunday. Anthony Davis led the team in scoring with 30 points on 11 of 19 shooting, LeBron James added 28 points with seven rebounds and nine assists while Avery Bradley drained six 3-pointers to finish with 24 points on nine of 17 shooting. As a team, the Lakers shot 44 percent from the field and 10 of 35 from the 3-point line as they flexed their offense with 36 points in the third quarter to climb back into the contest, before holding the Clippers to just 22 points in the fourth quarter to come away with the win.

The Nets have been building nicely despite playing with so many injuries to key players, but they're up for a real test against the red-hot Lakers who are coming into this one fresh off wins over the Bucks and the Clippers. It's hard to see anything but another win for the Lakers at home, but this line just seems too hefty for this matchup, especially with LeBron James listed as questionable for this meeting. I'm taking the Nets with the points in what looks like a danger game for the Lakers.