The Oklahoma City pay a visit to the Boston Celtics at the TD Garden on Sunday night.

The Oklahoma City Thunder have been in fine form lately as they've won seven of their past nine games and they will be aiming for a third straight victory after making light work of the Knicks in a 126-103 road win on Friday. Danilo Gallinari led the team with 22 points on seven of 13 shooting, Chris Paul added 21 points with 12 assists while Shai Gilgeous-Alexander chipped in with 18 points and five assists. As a team, the Thunder shot 49 percent from the field and 12 of 31 from the 3-point line as they set the tone defensively by holding the Knicks to just 20 points in the first quarter, before running away with it in the second half where they poured in 65 points to finish in a blowout.

Meanwhile, the Boston Celtics have been on a bit of a slide as they've lost four of their last seven games and they will be hoping to bounce back after falling short to the Jazz in a 99-94 home loss on Friday. Marcus Smart led the team with 29 points on nine of 23 shooting, Jayson Tatum added 18 points while Kemba Walker chipped in with 13 points and seven assists. As a team, the Celtics shot just 37 percent from the field and 10 of 36 from the 3-point line but they were always playing from behind after going cold in the second quarter where they scored just 20 points.

The Thunder have quietly been one of the form teams in the league and you could say the same for the Celtics before the injuries started to pile up. Gordon Hayward is set to return after sitting out the last two games and they're going to need him as the Thunder have been playing well lately. This should be a close one, so with that being said, I'm going to take the Thunder with any points I can get. 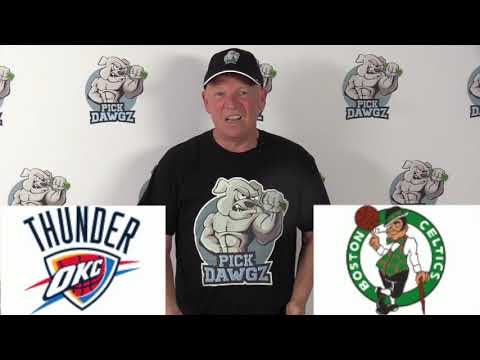