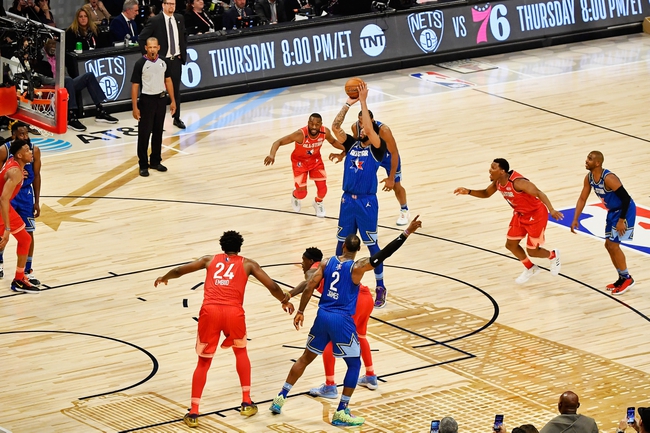 The Bucks are still the best team in the league right now, despite their loss to the Pacers in their last game. They won five straight before the loss

The Lakers won three-straight heading into the All-Star Break over the Nuggets, Suns, and Warriors. The offense has looked great in that span.

The Raptors took a loss to Brooklyn to head into the break. They had won fifteen straight before that game, so they remain one of the contenders in the East.

Boston won a nice home game over LAC 141-133. They have won eight of their last nine games and are right behind Toronto.

Denver took a four-point home loss to the Lakers after winning four straight games before that.

The Jazz are getting hot again, as they have won four in a row after their losing streak of four games.

The Clippers have lost two in a row and three of their last four. Kawhi Leonard was awarded the Kobe Bryant MVP award for the All-Star Game.

The Heat lost four of their last five games heading into the break, which is definitely a concern.

The 76ers won three straight at home before the break and will look to build on that. Their next game is at home against their division rival, Brooklyn Nets.

Houston took down Boston at home 116-105 in their last game before the break.

Doncic scored 33 points in his return from injury against the Kings in a winning effort. The Mavs severely need him every step of the way for the rest of the season.

The Thunder took down Zion’s Pelicans 123-118 on the road. Chris Paul completed his first alley-oop dunk in the All-Star Game, which was very entertaining to see.

What better way to snap a nagging losing streak than to grab a win at home over the league’s best Milwaukee Bucks.

The Grizzlies took down the Wizards and Trail Blazers to head into the break. Every win is big for the rest of the season for Memphis.

The Nets have won four of their last five and two of which were against the Pacers and Raptors. Is this the time that Brooklyn gets hot?

Portland lost two road games to Memphis and New Orleans, as their defense has struggled recently.

Orlando got two much-needed wins over the Hawks and Pistons at home. Orlando is currently 3.0 games ahead of the Wizards for the last spot in the Eastern Conference playoffs.

The Spurs have developed a big, 5.0 game hole for themselves for the 8th seed in the West after they lost five games.

The Pelicans are 5.5 games behind Memphis despite winning three of their last four games to head into the break.

The Suns snapped their two-game losing streak with a win over Golden State, 112-106.

The Kings lost two road games to the Bucks and Mavericks, as they were expected to.

Washington won three of four including a 119-118 home win over the Mavericks. They find themselves only 3.0 games behind the Magic for the 8th seed in the EC.

The Hornets won a game over Detroit by only scoring 87 points. Yeah, you read that correctly, 87 points.

The Knicks went on a four-game win streak but have fallen back to earth after losing to the Hawks and Wizards.

Six losses in a row for Chicago as their defense has played very poorly recently.

The Pistons have suffered on offense without Andre Drummond, and they have lost four straight.

The Hawks’ defense makes it impossible for them to win consistently. They lost back-to-back road games to the Magic and Cavs to head into ASG weekend.

The T-Wolves finally ended their historic losing streak with a win over the Clippers.

The Cavs have the worst record in the Eastern Conference and are two losses away from clinching an under .500 season.

From an NBA Finals appearance to the worst record in the NBA, the Warriors are looking forward to the 2020-21 season.