Where to Watch: NSCA, SUN Stream live sports and exclusive originals on ESPN+. Sign up now!

The Miami Heat and the Sacramento Kings duke it out at the Golden 1 Center on Friday night.

The Miami Heat have been in pretty good shape lately as they've won seven of their past 11 games, but they are coming into this one hoping to bounce back after getting thrashed by the Clippers in a 128-111 road loss on Wednesday. Derrick Jones Jr. led the team in scoring with 25 points, nine rebounds and three assists on 10 of 12 shooting, Bam Adebayo added 22 points with 11 rebounds and six assists while Kendrick Nunn and Goran Dragic each scored 13 points. As a team, the Heat shot 43 percent from the field and 16 of 42 from the 3-point line as they poured in 35 points in the second quarter to lead by three points at halftime, before getting blown out in the second half where the Clippers outscored them by 73-53 as they connected on a franchise record 24 3-pointers.

Meanwhile, the Sacramento Kings have been in decent shape as they've won four of their last six games and they will be looking to stay hot after sneaking past the Timberwolves in a 113-109 home win on Monday. De'Aaron Fox led the team with 31 points and five assists on 10 of 16 shooting, Bogdan Bogdanovic added 23 points on five of seven shooting while Buddy Hield chimed in with 16 points and three assists in just 20 minutes off the bench. As a team, the Kings shot 50 percent from the field and a healthy 14 of 27 from the 3-point line as they led at 15 points at halftime and by as many as 21 points before holding on for the narrow win after the Timberwolves cut it down to just three with 5:02 remaining.

These two squads have already met once this season with the Heat winning by 118-113 in overtime back on Jan 20 and I'm expecting another close contest as the Kings have been on a nice run lately. The Heat will likely be shorthanded for this one as Jimmy Butler is listed as doubtful with a shoulder injury, but they are 20-5-1 ATS in their last 26 games following a loss while the Kings are only 3-12-1 ATS in their last 16 home games. You could make an argument for either side here, but I'm sticking with the more consistent Heat to take care of business in this one. 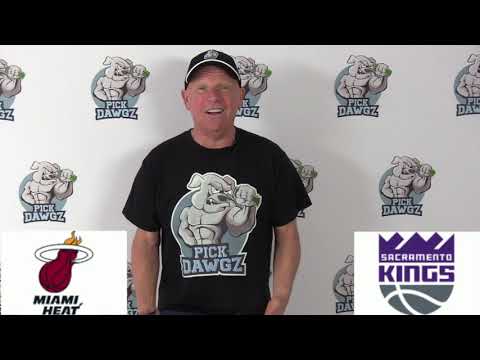