Where to Watch: NBCH, FSNO Stream live sports and exclusive originals on ESPN+. Sign up now!

The New Orleans Pelicans pay a visit to the Chicago Bulls at the United Center on Thursday night.

The New Orleans Pelicans have been searching for consistency as they’ve lost four of their last seven games and they will be hoping to stop a two-game skid after getting routed by the Bucks in a 120-108 home loss on Tuesday. Brandon Ingram led the team with 32 points on 12 of 19 shooting, Zion Williamson added 20 points with seven rebounds and five assists while Lonzo Ball chipped in with 11 points, 14 rebounds and three assists. As a team, the Pelicans shot just 38 percent from the field and 14 of 49 from the 3-point line as they got off to a hot start with 61 points in the first half, before the Bucks took over the game with a 42-24 third quarter push which had them trailing by as many as 19 points.

Meanwhile, the Chicago Bulls were in decent shape when they won six games during a 10-game stretch, but they’ve gone ice-cold again with three straight losses after getting thrashed by the Raptors in a 129-102 road loss on Sunday. Thaddeus Young led the team in scoring with 21 points and seven rebounds on nine of 12 shooting, Zach LaVine added 18 points with seven rebounds and seven assists while Chandler Hutchison chipped in with 17 points. As a team, the Bulls shot just 38 percent from the field and 15 of 48 from the 3-point line as they poured in 34 points in the second quarter to take the lead going into halftime, but they were no match in the second half where the Raptors outscored them by 69-39.

Head to head, the Pelicans are 8-1 ATS in the last nine meetings in Chicago.

The Pelicans haven’t been in the best shape, but there is so much to be optimistic about with Williamson working himself into the rotation. You can’t say the same about the Bulls who just don’t have the weapons to hang with teams other than LaVine who has cooled off lately. The Pelicans have been anything but consistent this season, but they are 7-2-1 ATS in their last 10 road games and 8-1 ATS in the last nine meetings in Chicago, so I’m banking on them to get the win and cover here. 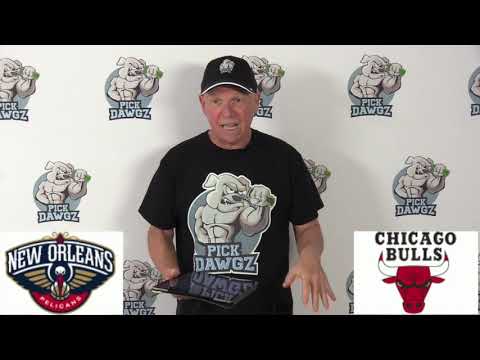