The Los Angeles Clippers and the Miami Heat duke it out at the American Airlines Arena on Friday night.

The Los Angeles Clippers have been in great form as they’ve won eight of their past 11 games, but they will be looking to bounce back after having their four-game win streak snapped by the Hawks in a 102-95 road loss on Wednesday. Montrezl Harrell led the team with 30 points on 12 of 23 shooting off the bench, Lou Williams added 18 points and seven assists while Landry Shamet chipped in with 13 points. As a team, the Clippers shot just 42 percent from the field and four of 21 from the 3-point line as they hit the ground running to lead by as many as 21 points in the first half, before falling victim to a resurgent Hawks team who dominated the second half by 61-35 to finish with their best comeback win of the season as the Clippers just had no answer for the Hawks’ John Collins who poured in 33 points.

Meanwhile, the Miami Heat have been in fine form themselves as they’ve won four of their last five games and they will be aiming for a third straight victory after sneaking past the Wizards in a 134-129 overtime home win on Wednesday. Tyler Herro drained seven 3-pointers on his way to 25 points off the bench, Jimmy Butler added 24 points with 10 assists, Goran Dragic scored 22 points with 10 assists while Kendrick Nunn and Kelly Olynyk each scored 14 points. As a team, the Heat shot 50 percent from the field and 17 of 33 from the 3-point line as they squandered a 21-point lead before forcing overtime where Butler scored nine of his 24 points.

Head to head, the under is 9-0 in the last nine meetings overall and the Clippers are 5-1 ATS in the last six meetings in Miami.

The Clippers have been one of the more inconsistent teams for a while now and they are low on confidence after falling to the Hawks in one of their worst losses of the season. The Heat have been in strong form as they've won four of their last five games and they have been almost unbeatable at home this season. I think the Clippers will come out strong after getting embarrassed in their last game, but in the end, I think the Heat will come out on top in a close one. 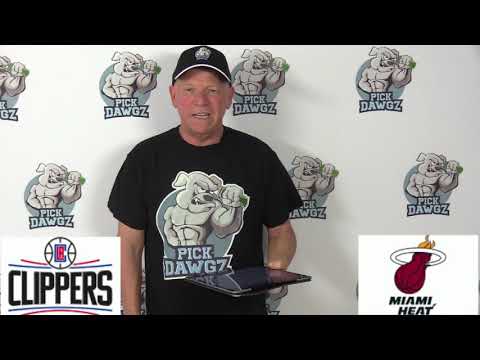