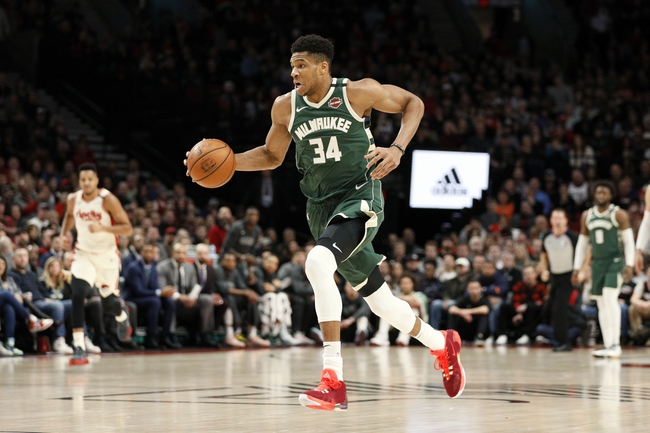 It has been three weeks since our last NBA Power Rankings here on Pick Dawgz. With each team approaching the halfway mark, let’s take a look at how the teams stack up.

The Bucks led by Giannis have continued to prosper in the Eastern Conference, owning the league’s best record. They just won three out of four games on their latest road trip and look to be firing on all cylinders.

The Lakers are back on an eight-game winning streak after a rough four-game losing streak. It isn’t alarming to see Anthony Davis battling minor injuries, but it is concerning to see how often he is on the injury report. This team is almost unbeatable when they are 100% healthy.

The Clippers have been playing well despite some minor bumps in the road -- such as a blowout home loss to the Grizzlies. With Kawhi 100% (which is almost impossible), this team is just as good as the teams above them.

The Heat have the potential to be contenders come playoff time and their record certainly demonstrates that. It is just odd to see them have bad losses on their resume, like the ones to the Wizards, Magic, the Irving-less Nets, and the Knicks.

James Harden is averaging 37.7 points per game which is unreal. The Rockets themselves still seem to not be playing to their full potential, even though they are still getting good results on most nights.

The Jazz are on a roll! They have won nine straight games, five of which came on the road. They are 14-1 in their last fifteen games and if they can keep it up, the teams above them in the standings should be worried.

Boston has dropped three of their last four games but snapped their three-game losing streak with a win over the Pelicans 140-105. Jayson Tatum has been playing well recently, and they will need him to keep it up if they want to win the Eastern Conference.

After a seven-game win streak that ended on Christmas Day, the Nuggets have been playing rather status quo basketball. A nice home win over the Clips may ignite some fire out of them.

The Mavs just recorded a big home win over the 76ers in their last outing, and Luka Doncic is back, healthy, and playing well. Losses to Denver and LAL do not scare me when it comes to this team and their future.

Ben Simmons trade rumors keep spreading every day and the future of the 76ers is quite murky. They are 2-5 in their last seven games and have struggled as of late.

With the slew of injuries in Toronto, the Raptors have dropped a few more games than they would like. Siakam and Powell are back and are necessary for success in the 6.

Losses to the Hawks and Pelicans are not good looks for this Pacers team. They have played either extremely well, or terribly bad this season. The inconsistency worries me, especially in a competitive conference.

A solid 21 point home victory against the Rockets was combated with a 15 point loss at home vs the Lakers. The Thunder may move CP3 this season, but he is playing very well as of late.

Don’t look now, but Memphis is on a five-game win streak. Ja Morant has played with great intangibles and looks like a seasoned vet already. The Grizzlies currently own the 8th seed in the Western Conference.

It is obvious that the Spurs do not have a chance of doing too much damage in the Western Conference with their current roster, but Greg Popovich still has his guys working hard and playing as well as they can. They split a home-and-home versus the Bucks, and are tied with the Griz for the 8th seed.

Defense wins championships, but although Orlando plays defense very well under Steve Clifford, this team simply does not have the star power to be considered a contender in the Eastern Conference. They can, however, be respected spoilers for the rest of the year, and perhaps earn a 7th or 8th seed ticket into the postseason as a one and done.

The Nets just snapped their seven-game losing streak with a surprise win over the Heat at home. Irving looked great in his return and hopefully, he can stay healthy for the rest of the season. If not, this team is mediocre at best.

Portland has struggled badly recently, 2-8 in their last 10 games. The Trail Blazers are one of the more surprising teams this season, and their struggles are puzzling.

Phoenix started the season hot but now have fallen way back in the standings. Devin Booker is scoring 26.2 points per game, so that is a plus.

This has been a frustrating season for the T-Wolves, as they are just not a good basketball team. They have picked up some wins against sub .500 teams but just are not able to take the next step.

As said in the last installment of NBA Power Rankings, the Hornets work extremely hard. It shows that there is no excuse for complete failure even when there is a lack of talent in an organization. If this team somehow finds its way into the postseason, it will be considered a huge victory.

The Kings have the pieces moving forward to be quite dangerous, but this is just not their year. With injuries and bad performances, the season for Sacramento is almost over in terms of a playoff chance.

The Bulls luckily ended their six-game losing streak with a much-needed win over the Pistons. Zach LaVine has played very well for Chicago, but that is about it.

Andre Drummond trade talks have commenced, and his ejection against the Bulls is not a good look. The Pistons should be making some noise at the trade deadline on Feb 6, as sellers of course.

O Zion, O Zion, wherefore art thou Zion. The Pelicans surely need him in their future, as their roster currently is not good enough. Brandon Ingram continues to be the bright spot of the season for NOP.

3-2 in their last five is probably the best consolation prize the Wizards could get this season. Bradley Beal still remains one of the most underrated players in the league.

Just as the Pistons, the Cavs most likely will be big-time sellers come the NBA trade deadline. Winners in two straight on the road do not hurt though.

A surprising home comeback win over the Miami Heat snaps a five-game losing skid for the Knicks. This organization is still a mess though, and Marcus Morris seems to be on his way out.

Trae Young is the leader of this Hawks team, and it seems that he is the only one trying in Atlanta. The Hawks and their fans are already focused on the offseason and the 2020 draft.

Well, that escalated quickly. One minute, you are in the NBA Finals, the next minute you find yourselves dead last in the Pick Dawgz NBA Power Rankings. Their roster is depleted with injuries and weak depth at best, what can I say.