Where to Watch: FSIN, NSPA Stream live sports and exclusive originals on ESPN+. Sign up now!

The Indiana Pacers play host to the Philadelphia 76ers at Bankers Life Fieldhouse on Monday night.

The Philadelphia 76ers have been in a bit of a rut as they've lost five of their last seven games and they were going for a third straight win before getting stopped by the Mavericks in a 109-91 road loss on Saturday. Tobias Harris led the team with 20 points and 10 rebounds, Al Horford and Josh Richardson each scored 16 points while Ben Simmons chipped in with 11 points, 11 assists and four steals. As a team, the 76ers shot just 37 percent from the field and nine of 37 from the 3-point line as they set the tone with their defense by holding the Mavericks to just 41 points in the first half, but the rest of the game belonged to the Mavericks who exploded for 68 points in the second half.
Meanwhile, the Indiana Pacers have been in decent shape as they've split their last eight games and they will be looking to build some momentum after taking down the Bulls in a 116-105 road win on Friday. Myles Turner led the team with 27 points, 14 rebounds and three assists, Aaron Holiday added 19 points and eight assists off the bench while TJ Warren chipped in with 17 points. As a team, the Pacers shot a sizzling 57 percent from the field and 11 of 30 from the 3-point line as they built an eight-point lead going into halftime, before riding the hot hand of Turner in the 37-point fourth quarter to pull away late.
Looking at the betting trends, the 76ers are 1-4-1 ATS in their last six games against a team with a winning record, 0-4-1 ATS in their last five road games and 1-5-1 ATS in their last seven games overall. The Pacers are 3-9-1 ATS in their last 13 games following a win of more than 10 points and 9-3-1 ATS in their last 13 home games against a team with a losing road record.
Head to head, the under is 5-0 in the last five meetings in Indiana and the under is 7-1 in the last eight meetings overall.
Domantas Sabonis is questionable with a knee injury while Malcolm Brogdon is questionable for Monday with an illness so the Pacers could be shorthanded again, but I'm still expecting a close game as the 76ers have been on the slide with Joel Embiid still out of the lineup. It's hard to split between these teams at the moment, but the Pacers have been tough to beat at home this season and I think the home crowd will be just enough to get them over the line in a close one. 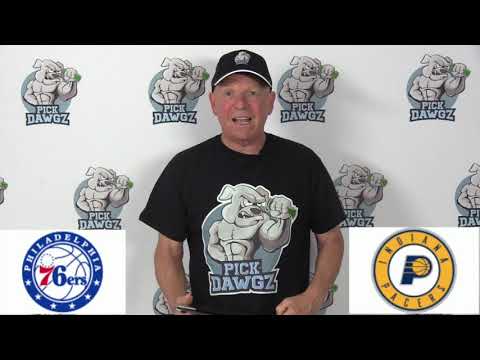