The Miami Heat and the Los Angeles Lakers collide in Game 1 of the NBA Finals at the AdventHealth Arena on Wednesday night.

The Miami Heat have made a tough road to the NBA Finals look pretty easy as they cruised past the shorthanded Pacers and the Bucks, before making light work of the Celtics in six games. Goran Dragic has been the leading scorer for the team in these playoffs as he is averaging 20.9 points and 4.7 assists, Jimmy Butler has been the heart and soul of the team with averages of 20.7 points, 4.5 assists and 1.9 steals per game, Bam Adebayo took his game to another level with averages of 18.5 points, 11.4 rebounds and 4.9 assists while Tyler Herro has been consistently impactful off the bench with averages of 16.5 points, 5.5 rebounds and 3.9 assists per game. As a team, the Heat averaged 112.2 points per game while shooting 45.9 percent from the field and 35.7 percent from the 3-point line. Butler has been the vocal leader off the team, but the Heat’s biggest strength is that they never rely on any one person having a big game. We’ve already seen Butler come up with clutch plays, but we’ve also seen Herro lead the team in scoring, Adebayo win a game with a block and Robinson is giving team fits when he gets hot from the perimeter.

Meanwhile, the Los Angeles Lakers have enjoyed an easier road to the NBA Finals as they made light work of the shorthanded Trailblazers, Rockets and Nuggets without ever looking like they were in danger. Anthony Davis is leading the team with averages of 28.8 points, 9.3 rebounds, 3.6 assists and 1.2 blocks per game, LeBron James is coming into the Finals fresh off a monster triple-double and is averaging 26.7 points, 10.3 rebounds and 8.9 assists per game, Kentavious Caldwell-Pope is averaging 10.5 points per game while Rajon Rondo is playing a key role off the bench with averages of 9.1 points and 7.2 assists per game. As a team, the Lakers are averaging 113.9 points per game while shooting 49.8 percent from the field and 35.5 percent from the 3-point line. This team goes as far as Davis and James can take them, but it’s not like they are completely reliant on those two as Rondo has been fantastic off the bench, Kyle Kuzma has chipped in with a game-winner and even Dwight Howard has been able to impact a game in limited minutes.

The Heat have held the underdog tag all season and they’re certainly underdogs in the NBA Finals, but that won’t bother them one bit. Butler has been a fantastic leader for the Heat and coach Spoelstra has done a great job in these playoffs, especially against the Celtics in the previous round, but what makes the Heat so special is that everyone stars in their role and they just move the ball so well on the offensive end. The Lakers have been the heavy favorites ever since the Clippers got eliminated and they’ve made it look easy as no team has been able to slow down the two-headed monster of Davis and James. The role players of the Lakers have been good enough to this point, but they just haven’t had to take on a well-oiled machine of the Heat, so this series could be closer than the odds suggest. It’s tough to bet against James who is playing his 10th NBA Finals series, but the Heat have been the best bet in these playoffs and I think their versatility and adaptability is enough to test the Lakers in the series opener. Give me the Heat with the points in a close one. 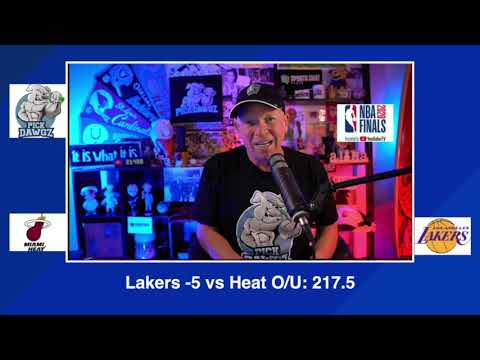