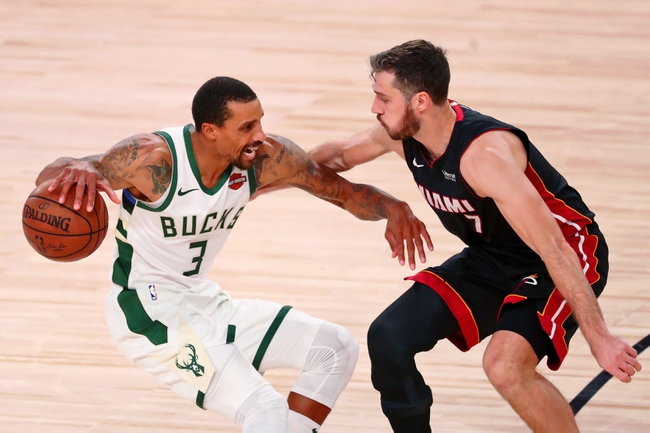 The Miami Heat and the Milwaukee Bucks duke it out in Game 5 of the East Semifinals at the HP Field House on Tuesday night.

The Miami Heat will be looked set to complete the series sweep in Game 4, but they’re suddenly looking to bounce back after falling to the Bucks by 118-115 in overtime on Sunday. Bam Adebayo led the team with 26 points, 12 rebounds and eight assists on 10 of 13 shooting, Duncan Robinson added 20 points, Jae Crowder scored 18 points while Jimmy Butler and Goran Dragic each scored 17 points. As a team, the Heat shot 44 percent from the field and 17 of 47 from the 3-point line as they survived in regulation with the Bucks missing on a key free throw with 1.9 seconds left in the fourth quarter. However, they couldn’t make the most of open looks in overtime and it cost them as the shorthanded Bucks rallied to stay alive in the series.

Meanwhile, the Milwaukee Bucks had their backs against the wall and just refused to quit despite being down 3-0 in the series and down by 12 points in the first quarter. Khris Middleton led the team with 36 points, eight rebounds and eight assists, Giannis Antetokounmpo added 19 points in just 11 minutes of action before going down with that ankle sprain, while Brook Lopez and Eric Bledsoe each scored 14 points. As a team, the Bucks shot 48 percent from the field and 11 of 35 from the 3-point line as they outlasted the Heat despite losing Antetokounmpo early in the game. Middleton picked up the scoring load as he shot 12 of 28 from the field, but overall, it was just their intensity on defense as they forced the Heat into 15 turnovers while winning the rebounding battle despite being shorthanded.

Head to head, the Heat are 5-2 ATS in the last seven meetings overall.

The series could’ve easily been over already as Game 4 was on a knife’s edge, but the Bucks found a way to keep their season alive, so now it’s all eyes on Antetokounmpo who is currently listed as questionable for Tuesday. Sure, the Bucks have shown they can win without him, but the Heat have been rock-solid in the playoffs and they could’ve easily won on Sunday. With that being said, I’m sticking with the Heat to bounce back and finish the job in this one.