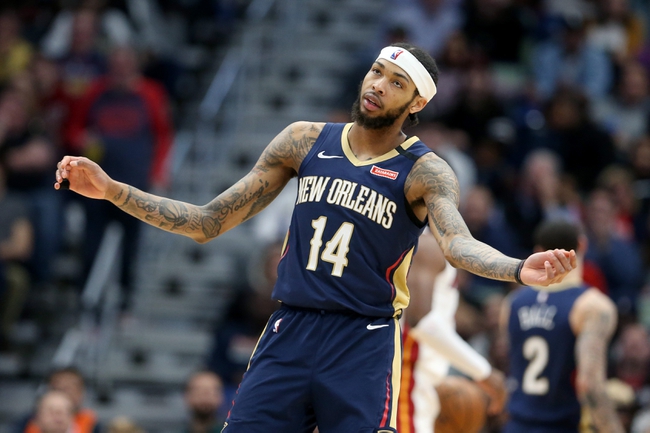 The New Orleans Pelicans and the Brooklyn Nets meet Wednesday in NBA action from the Arena.

The Pelicans are trying to play their way into the NBA postseason during this restart. New Orleans is sitting at 28-36 overall, 3.5 games out of the number eight spot. As for the Nets, they’re 30-34 on the season and in the No. 7 playoff spot in the East. Brooklyn holds a half-game lead over the eighth-place Magic. Check back all season long for free NBA picks and NBA predictions at Pick Dawgz.

New Orleans has had a pretty crazy season thus far, and it would be quite an accomplishment for the team to play into that final No. 8 seed during the restart. When the Pelicans began the 2019-20 season at 6-22 and were injured up and down the roster, things were looking bleak. Once Derrick Favors returned, and New Orleans got Zion Willamson back, the team’s fortunes began to change. The Pelicans are now a trendy pick to do some major damage in the playoffs.

Williamson had to leave the NBA bubble last week to tend to a family matter, but he’s expected to be back in full for the restart. That doesn’t bode well for the Pelicans’ status in this scrimmage game, but the team should have enough talent to cover most of the gap. Look for Brandon Ingram to fill in most of Williamson’s production. This year. Ingram is averaging 24.3 PPG and 6.3 RPG. From a strategy standpoint, we’ll probably see more 3-point and perimeter shooting from New Orleans here as opposed to their usual work under the basket.

Over on the Nets’ side, they’re in a precarious position. Brooklyn has been riddled with injuries and opt-outs during this restart process. The team will be without big names like Kevin Durant, Kyrie Irving, DeAndre Jordan, Spencer Dinwiddie, Taurean Prince, Wilson Chandler and Nicolas Claxton. That means less than half of the Nets’ 10-man rotation at the start of the year are still available, and that’s a problem.

Minutes for guys like Caris LeVert will probably inflate heavily in the bubble games, and Brooklyn is going to have to cobble together a new strategy with what’s effectively a new team. Realistically it’ll be tough for the Nets to play themselves out of the postseason (they have a six-game lead over the ninth-place Wizards) but it’s conceivable.

Pick: Going Pelicans. Neither of these teams is facing optimal rosters for the beginning of these scrimmages, but New Orleans is simply the deeper team—even without Zion. We’re probably going to see a sloppy game as the teams shake the rust off and get used to their surroundings. Prepare for lots of missed field goals and turnovers. At least the NBA is back, though.