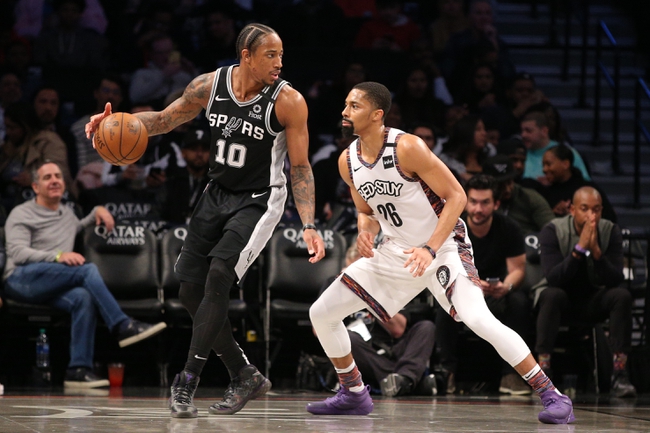 The San Antonio Spurs have not had a good season to this point and will be looking to find a full court buzzer beater to propel them into the playoffs.  Okay, they don’t need a buzzer beater, but the Spurs do need some help from other teams if San Antonio wants to make the postseason.  The Spurs have a record of (27-36) and are in the cellar of the Southwest.  San Antonio is averaging 113.2 points per game, while allowing barely 115 per contest.  Let’s take a closer look at the Spurs roster, remaining games, and odds.

Roster Breakdown: The Spurs have been led by DeMar DeRozan on the season, as the forward is registering over 22 points per contest, while pulling down 5.6 rebounds, and dishing out almost 6 assists.  LaMarcus Aldridge has had his fair share of contributions, as he is totaling 18.9 points and 7.4 rebounds per game.  Overall the Spurs have 7 players averaging at least 10 points per contest.  San Antonio doesn’t have a deep bench, but still have the likes of Patty Mills and Rudy Gay coming off the bench spelling the starters in minutes.

Help or Hurt: This long break helps the Spurs more than it hurts.  San Antonio is in the process of having one of their worst seasons since the mid 1990’s.  This break allows San Antonio to catch their breath and look at the road ahead.  The Spurs can use this restart as a fresh start to the season, as the Spurs will need to win games and help from other organizations if the Spurs want to make it to the postseason.  The Spurs have made the playoffs the last 22 seasons, but that streak is in jeopardy.  Let’s take a look at what the postseason odds look like for San Antonio.

Odds:  The Spurs have been given +18000 odds to win the Western Conference Finals and +21000 odds to win the NBA Finals Championship.  It’s clear the oddsmakers don’t see the Spurs as being a threat for the postseason.  However, if the Spurs want to prove the fans wrong, DeRozan and Aldridge will need some help from the rest of the team.