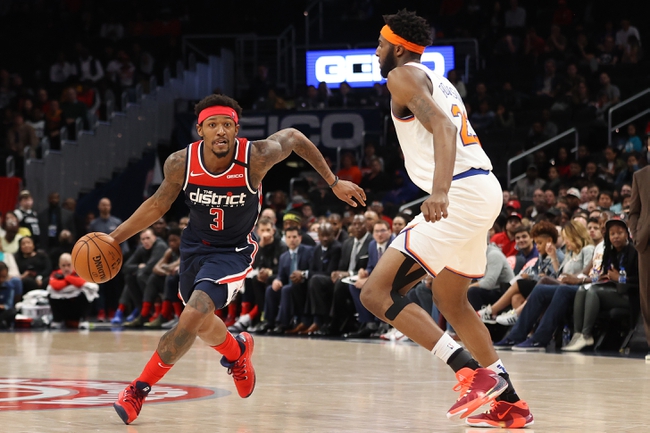 The Washington Wizards will be looking to gain traction once the league is back in action.  The Wizards sit in 3rd place in the Southeast, trailing the Miami Heat and the Orlando Magic.  Washington has a record of (24-40).  The Wizards haven’t had much issue on offense, as the Wizards are totaling over 115 points per contest. However, the same can’t be said for the defense.  The defense is allowing almost 120 points per game.  Washington has been led by Bradley Beal during the 2019-20 season.  Let’s take a closer look at the Wizards roster, remaining games, and a glance at the odds for the Wizards.

Roster Breakdown: Beal is leading the way, as the product from St. Louis, MO is averaging over 30 points per contest, while also totaling 6.1 assists per game.  Davis Bertans is 2nd on the team in points, even though he has started just 4 games out of a possible 54.  Bertans is recording 15.4 points and 4.5 rebounds per contest.  Rui Hachimura has started 41 games and is contributing 13.4 points per game.  Overall the Wizards have 8 players contributing double figures in points game in and game out.

Help or Hurt: The Wizards sit 16 games below the .500 mark and don’t exactly have a cake schedule once the league resumes.  A break for Washington was very helpful, as the Wizards can essentially look at the final 8 games as a new season.  The Wizards did not get to see the John Wall and Bradley Beal duo this season, as Wall has been out with an injury.  The Wizards have a tough schedule once league resumes, but with a slight improvement on defense, the Wizards could win a game here and there that Washington was not expected to win.

Odds: The Wizards have been given the worst odds out of teams eligible for postseason to win the Eastern Conference Finals at +16000, while having +25000 odds to win the NBA Finals Championship.  It's obvious that not many are even considering Washington has the possibility to do any damage in the final 8 games and the same could be said for the results during this year’s postseason. However, the Wizards have shown they can score with the best teams, it’s been the defense that has halted Washington more than a dozen of times.  The Wizards may not fare well once the games resume, but Washington will definitely compete in every game and taking the over on points scored per match up will be something to keep an eye on.