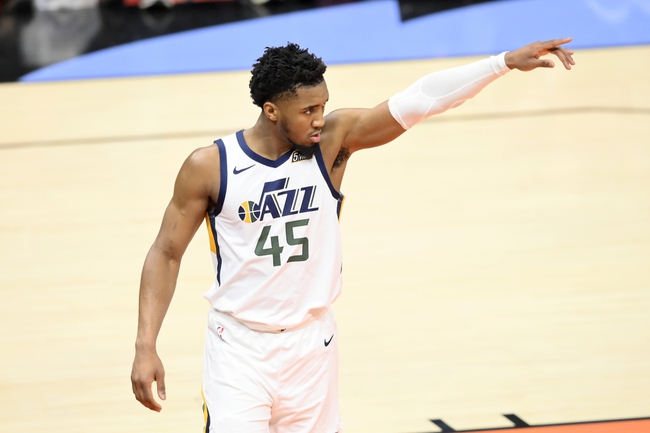 The Utah Jazz will be looking to catch the Denver Nuggets, as the Jazz sit 1.5 games out of 1st in the Northwest.  The Jazz have a record of (41-23) and lost their last game before the league was put on hold.  Utah has averaged 111 points per contest, while allowing less than 108 per contest.  The Jazz have been carried by Donovan Mitchell.  Let’s take a closer look at the roster, upcoming games, and odds for the Jazz.

Roster Breakdown: Mitchell has paced the Jazz with 24.2 points per contest, while also handing out 4.2 assists.  Mitchell is also leading the team in steals with an average of 1 per game.  Bojan Bogdanovic is the only other Jazz player collecting over 20 points per contest.  Bogdanovic is recording 20.2 points, while pulling down over 4 rebounds per game.  Rudy Gobert has been a steady Eddy on the season, averaging a double-double per game.  Gobert is totaling 15.1 points and 13.7 rebounds per contest. The center is also swatting 2 shots on average, as he leads the Jazz in blocks per game.

Help or Hurt: The Jazz were on quite the roll before the season came to a screeching halt. Utah had won 5 straight, before falling to Toronto when the season was put on hold.  Looking at how the rest of the season is laid out for Utah, the Jazz should be able to make some headway in the final 8 games, which should help their seeding.  The Jazz saw a lot of their success this season, due to their defense.  The Jazz had one of the best scoring defenses for most of the season.

Odds: Oddsmakers have given the Jazz +1300 odds to win the Western Conference Finals and +2900 odds to win the NBA Finals Championship. There is that saying that “defenses win championships”, the Jazz have a stout defense.  If the Jazz want to live up to that phrase, Utah will need to improve on the offensive side in these final 8 games, as Utah tries to improve their playoff seed.  There are more popular options out there when it comes to postseason odds, but the Jazz should not be overlooked once the NBA resumes play, as Utah will be looking to get back on the winning track.