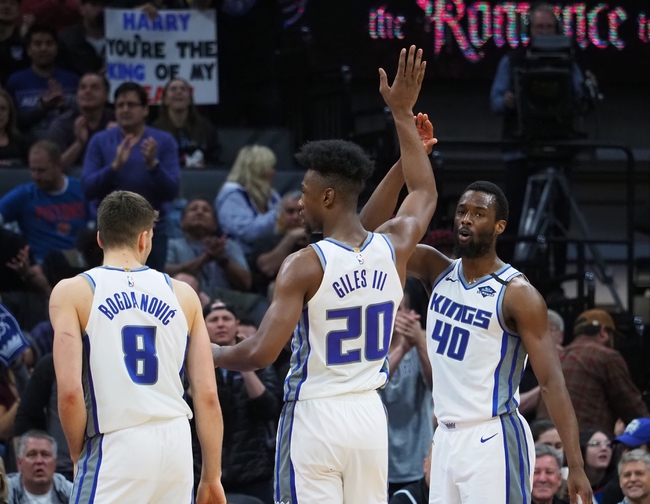 The Sacramento Kings will be hoping to improve their seed once the league resumes play.  The Kings are in 3rd place in the Pacific, behind the Lakers and Clippers.  Sacramento has a record of (28-36).  The Kings are averaging 109.7 points per game, while allowing 11.6 per contest.  Sacramento has been guided this season by De’Aaron Fox.  Let’s take a closer look at the Kings roster, upcoming games, and current odds for postseason play.

Roster Breakdown: Fox has led the way for the Kings, as he is leading the team in points, assists, and steals.  Fox is averaging 20.4 points, 6.8 assists, and 1.4 steals per contest.  Buddy Hield is 2nd on the team in points, collecting 19.8 per contest.  Hield has found his time in the starting lineup as hit and miss, as he has started 44 of the 64 games he has seen action in.  Harrison Barnes has been consistently in the starting lineup, as he has started all 64 games.  Barnes is totaling 14.7 points per contest.  Overall the Kings have 8 players averaging double figures in points.  Nemanja Bjelica is contributing 11.9 points, while having a team high in rebounds with 6.4.

Help or Hurt: The Coronavirus break hurt the Kings, as Sacramento was playing arguably their best basketball of the campaign.  The Kings had two separate 3 game win streaks in their last 10 contests, going 7-3 during that stretch.  The Kings have a young team and it is uncertain if this break will be a plus for Sacramento, as the Kings were playing well following the All-Star break.

Odds: The Kings have been given +16000 odds to win the Western Conference Finals and +25000 odds to win the NBA Finals Championship.  Sacramento has plenty of young talent, but young talent doesn’t always translate into games that matter late in the season.  Once the league resumes, it should be exciting to see Sacramento on offense, but the defense needs a lot more work if the Kings want to surprise people in the coming weeks. If the front office can retain some of this young talent, the future for Sacramento could be bright.