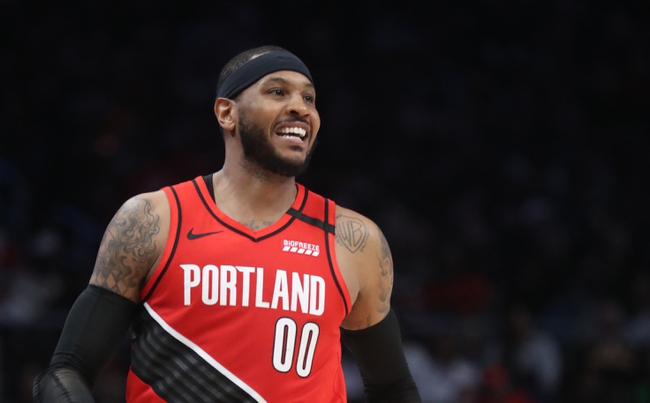 The Portland Trail Blazers will be looking to put together solid play once the league resumes.  Portland is currently in 4th place in the Northwest, as the only team behind the Trail Blazers is the Minnesota Timberwolves.  Portland has a record of (29-37), with 8 games in hand.  The Trail Blazers are averaging 113.6 points per contest, while allowing 115.2 per game.  Damian Lillard leads the way for Portland on offense.  Let’s take a closer look at the roster, games left on the schedule, and odds going forward.

Roster Breakdown: Lillard leads Portland in points, totaling 28.9 per game, while also dishing out nearly 8 assists per contest.  CJ McCollum is collecting 22.5 points per contest, which is 2nd on the team, only behind Lillard.  McCollum is converting on 38 percent of his shots from 3-point range.  Hassan Whiteside has been a plus since coming over from Miami after last season.  Whiteside is registering a double-double per game, totaling 16.3 points and 14.2 rebounds per contest.  Whiteside is also gathering more than 3 blocks per contest.   The Trail Blazers have also seen solid contributions from Carmelo Anthony.  Anthony is collecting 15.3 points per game.

Help or Hurt: This break should help the Trail Blazers, because this can be looked at as a fresh start.  Portland has been a mystery to me all season and it has surprised me that the Trail Blazers have underperformed this season. Yes, the Trail Blazers bench may not be as good as the Clippers, but the starting 5 for Portland is pretty solid.  I look for the Trail Blazers to use this break to their advantage and to come back with a mindset that is wiped clean.

Odds: The Portland Trail Blazers odds to win the Western Conference Finals are set at +8500, while being given odds of +16000 to win the NBA Finals Championship. Look for Lillard and company to come out on fire to try and improve their seeding for the expanded postseason.  This team has enough talent to do some work in these final 8 games and into the 19-20 postseason. The odds aren’t great for Portland to make noise in the playoffs, but with the lineup Portland has, a small taste seems enticing for a series win, depending on who Portland would be matchup against.