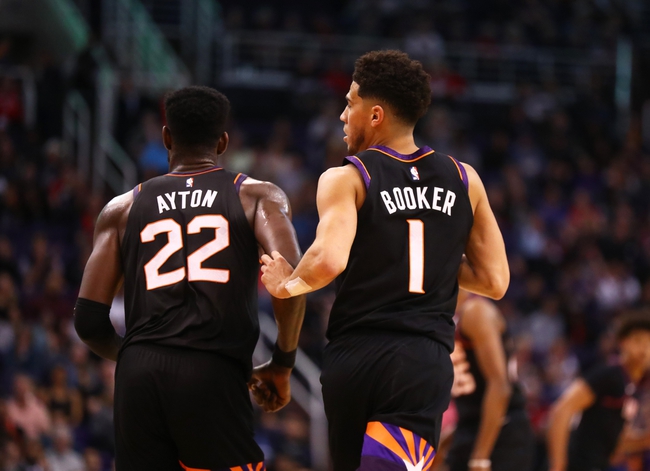 The Phoenix Suns are hoping to end the season on a high note, once the league resumes.  The Suns sit in 4th place in the Pacific, 24 games back of the Lakers.  Phoenix has a record of (26-39).  The Suns are totaling 112.6 points per contest, while allowing 113.9 per game.  The Suns have been led this season by Devin Booker.  Let’s take a closer look at the Suns roster, upcoming games, and odds for the postseason.

Roster Breakdown: Booker leads the way for Phoenix this season, as the guard has averaged 26.1 points per contest, while also giving out 6.6 helpers per game.  Kelly Oubre Jr. has been instrumental in helping Phoenix record 26 wins to this point, as he is collecting nearly 19 points per game.  Oubre Jr. is also pulling down over 6 boards per contest. Both Booker and Oubre Jr. can thank point guard Ricky Rubio for getting both of them involved on the offense.  Rubio while scoring a solid 13 points per game on the season, is also totaling 9 assists per game.  Deandre Ayton is a wild card at this point, as he has played in just 30 games this year, due to injuries and the PED suspension.

Help or Hurt:  Did the Coronavirus break help or hurt the Suns?  The break has helped the Suns get back towards full strength.  Phoenix should see the return of Deandre Ayton, who has been recovering from an injury.  Ayton has been no doubt a key part to this offense when in the lineup.  During 30 games this season, the former Arizona Wildcat is recording a double-double per contest.  Ayton has posted 19 points and 12 rebounds on average per game this year.

Odds: The Phoenix Suns have not been given stellar odds to win the Westrn Conference Finals, as oddsmakers have given Phoenix +25000 odds to do just that.  The Suns have been given the same odds to win the NBA Finals Championship.  It’s no secret that the Suns are a different team when Ayton is on the court.  However, even with Ayton on the court, the Suns still lack talent compared to other teams in the Western Conference.  The Suns should benefit from their remaining 8 games, if Ayton can be a factor like he was in his first 30 games.