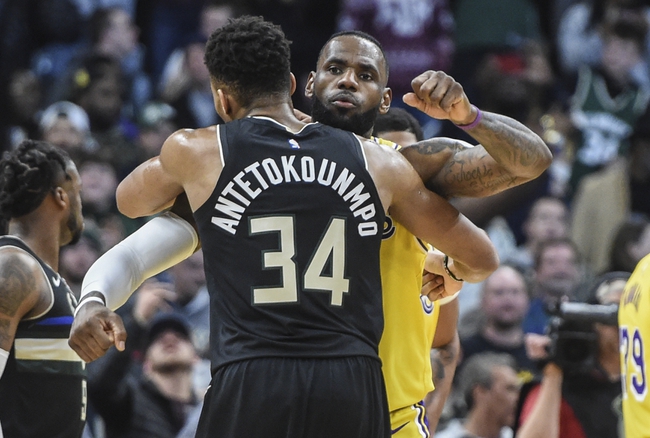 We are about eight and a half weeks into the 2019-20 NBA regular season. With each team having at least 25 games under their belts, it is time for the first NBA Power Rankings here on Pick Dawgz.

After a disappointing postseason, Giannis and the hungry Bucks are in ‘championship or bust’ mode this season. They have played very well to start, and are the favorites to make it to the end.

The Lakers, with LeBron James, Anthony Davis, and company have one of the deepest rosters in the league. They will be a force to be reckoned with and the favorite to make the NBA Finals out of the West.

The Clippers are right up there with the Lakers as powerhouses in the Western Conference. The battle of LA will come down to if Kawhi Leonard can stay healthy for the entire year, which may be difficult.

After a huge ten-game winning streak, the Celtics have fallen back to earth, going 8-6 after the streak. Boston will be a tough out come playoff time, and it all boils down to staying healthy and consistent.

The Heat have played better than many would have thought so far this season. There were a lot of question marks for Miami, but they have proven that they can and will play solid basketball. Their powerful offense is something that can make them lethal during postseason play.

This 76ers team, currently holding the fifth seed in the East, shows just how deep the conference is. The 76ers have found their rhythm after a shaky start, and have proven that they are serious players for the Eastern Conference Championship, and perhaps more.

The defending champions had a 15-4 start to the season but found themselves losing to above-average teams more often than they would want. This Toronto team has the depth, but do they have the star power to overcome top tier teams? I do not think so.

The Nuggets are winners of four in a row, and even though these were all home games against average or below-average teams, a win is a win. They have the potential to be dangerous in the West if they can keep up their recent success.

Houston has not played to its full capacity this season. James Harden has proven time in and time out that he is one of the most talented scorers the NBA has ever seen, but he cannot do it alone. A big road win over the Clips will help, but this upcoming road trip against three sub-.500 teams will tell a lot about what their true identity is.

The Pacers are hot, Fuego, on fire as of late! Beating both the Lakers and Celtics in the latest four-game win streak shows that they may be ready to take the next step in the East. A couple of games in the near future against tough Eastern Conference opponents may show their true colors.

Dallas would be higher on the list if their star prodigy Luka Doncic did not go down with an ankle sprain. It will have him sidelined for a little while, and although Dallas beat Milwaukee and Philadelphia without him, they are nowhere near as good without him, as they are with him. When he comes back, Dallas may be able to make a run in the West, but I do not think they are loaded the way the Lakers or Clippers are.

Utah has shown conflicting signs in their first 27 games to start the season. They are on a three-game win streak, albeit against below .500 teams. They are just plainly not as talented nor as deep as the powerhouses in the front of the Western Conference.

The Nets have played well as of late, after an average start to the season. The injury to Kyrie hurts but has not derailed the team when it comes to results. In fact, they have actually arguably played better without Irving, as Spencer Dinwiddie and the Nets have found a scoring rhythm that works. When Irving returns, the Nets need to find a way to make him work, and if they do, they can be players.

The Thunder have played a seesaw game of basketball, going back and forth between bad losses and impressive wins the early part of the season. They simply do not have the roster to compete in the Western Conference, and it shows on a consistency level.

Portland, although four games under .500, is still a team that will give teams trouble throughout the season. Damian Lillard and the Blazers have a shot at a 7th or 8th seed, but they have to start accumulating wins...fast!

The Magic have a solid foundation with Nikola Vucevic, Jonathan Issac, and young Mo Bamba. They have a long road ahead of them when it comes to being a competitor in the Eastern Conference, but they have a solid shot of making the playoffs as an 8th seed.

The Kings are promising but have not shown to be the real deal quite yet. With a record three games below .500 in a difficult Western Conference, the Kings seem to not be ready for big things at the moment, but there are still a lot of games left, and they may be able to make strides with Hield, Fox, and others.

Phoenix is young and should be a very competitive team in the very near future, but they are plainly not there yet. They have dropped five of their last six, and have a tough schedule ahead.

The Spurs are not the Spurs of four, five years ago. Coach Popovich and the boys do not seem to be competing at the rate they expect, and it will only get harder from here. This season may be the catalyst to the start of a long rebuild ahead.

After a 10-8 start, the T-Wolves have lost eight in a row, and with a road trip ahead, dark days are soon to come for Minnesota and their fans. They are a downright mess currently.

Andre Drummond leads the league in rebounding, yet the Pistons are one of the worst in the stat as a team! This and many other factors are the reasons why the Pistons have struggled this season.

The Hornets may not be the most talented team in the league. In fact, they are probably the least talented squad in the NBA; however, they play as a unit, and work harder than most, thus leading them to the bubble of the Eastern Conference playoff picture so far. If they continue to work, they may be able to get the results they want, but each game will be a battle to the end.

Chicago’s offensive woes have been the main reason as to why they have not been able consistently to put together wins. Lauri Markkanen has shot the three-ball well as of late, but that alone will not be enough for Chicago to win more games.

Ja Morant has looked comfortable during the start of his rookie campaign. Memphis’ core is young, but signs of development have given fans a reason to believe that Memphis basketball should not be irrelevant for too much longer

The Wizards have been losers in five out of their last six games, and it all comes down to their defense. One of, if not the worst defenses in the league has plagued the Wizards, especially recently.

The Pelicans have finally broken their 13 games losing streak with a win over the T-Wolves. Other than that, there is nothing positive to say about the Pels, other than Zion Williamson will be on their team in the future.

The Knicks have been a bad basketball franchise for some time now, and although RJ Barrett has looked nice in his rookie season, the Knicks are feeling their past mistakes this season. Kevin Knox and Frank Ntilikina were not and are not the players that fans hoped they were.

The Cavs are obviously in rebuild mode, and that is fine. They have some pieces they can build on like Collin Sexton, and although they have been abysmal this season, they can only get better from here. A win over Memphis shows that they can still give some teams a run for their money.

Atlanta cannot defend well at all, as they just gave up 143 points to the Knicks! The Hawks have a long road ahead of them. Trae Young is having a great season, so not everything is negative.

The Golden State Warriors 2019-20 season has been a downright mess, as they have gone from NBA Finals runner-ups to an absolute embarrassment very quickly. Injuries to stars, Klay Thompson and Stephen Curry have not helped one bit. Fans of Dub City need to just find something else to do for at least six months.