Where to Watch: SPEC, FSSE Stream live sports and exclusive originals on ESPN+. Sign up now!

The Los Angeles Lakers travel to the State Farm Arena to take on the struggling Atlanta Hawks on Sunday night.

The Los Angeles Lakers have been on an absolute tear as they’ve won 23 of their first 26 games of the season and they will be aiming for a seventh straight victory after escaping Miami with a 113-110 road win on Friday. Anthony Davis turned it on late to lead the team with 33 points and 10 rebounds on 11 of 20 shooting, LeBron James racked up 28 points with nine rebounds and 12 assists while Kentavious Caldwell-Pope chipped in with a crucial 15 points on six of nine shooting. As a team, the Lakers shot 49 percent from the field and 12 of 37 from the 3-point line as they fell behind by as many as 14 points in the first half, before they rallied in the second half behind James and Anthony. In a close contest full of scoring runs from both teams, the difference was the size of the Lakers as they outrebounded the Heat by 50-34.

Meanwhile, the Atlanta Hawks have been in a serious slump as they’ve lost 14 of their last 16 games and they will be hoping to end a three-game skid after falling to the Pacers in a 110-100 home loss on Friday. Trae Young led the team with 23 points, seven rebounds and eight assists, De’Andre Hunter added 21 points while Jabari Parker chipped in with 20 points on nine of 13 shooting. As a team, the Hawks shot just 41 percent from the field and six of 28 from the 3-point line, but they still managed to pour in 35 points in the third quarter to make it a contest after falling behind by 15 points heading into halftime. Young filled the stat sheet but had a poor shooting night as he made just nine of 30 from the field.

Head to head, the Lakers are 5-2 ATS in the last seven meetings overall.

The Lakers have been on fire lately and it’s hard to imagine anything but an easy victory for them as they’ve been running through everyone, but they could be shorthanded as James is currently listed as questionable for Sunday due to right elbow soreness. The Hawks have been in a world of hurt ever since losing John Collins to suspension and they are only 0-4 ATS int heir last four games against a team with a winning record. The Lakers are 5-2 ATS in the last seven meetings overall and I think that trend continues here as the Hawks just don’t have the firepower to hang with the Lakers who have won 13 straight road games. 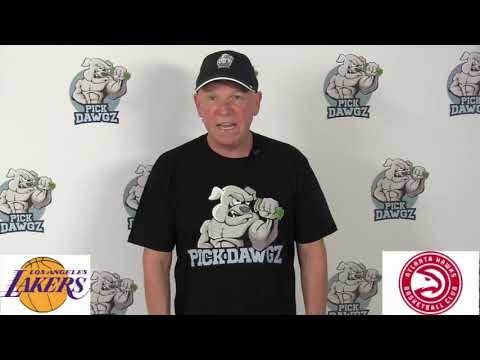