Where to Watch: FSDT, FSNO Stream live sports and exclusive originals on ESPN+. Sign up now!

The Detroit Pistons and the New Orleans Pelicans duke it out at the Smoothie King Center on Monday night.
The Detroit Pistons have been in decent form as they've won three of their last four games and they will be looking to build some momentum after taking down the Pacers in a 108-101 home win on Friday. Blake Griffin led the team with 25 points and five assists, Andre Drummond racked up 25 points with 22 rebounds and two blocks while Luke Kennard chipped in with 15 points and four assists. As a team, the Pistons shot 44 percent from the field and 11 of 25 from the 3-point line as they rallied for 37 points in the fourth quarter to escape with the win after squandering an early 13-point lead.
Meanwhile, the New Orleans Pelicans have been in a real slump as they're coming into this one looking to snap an eight-game skid after getting blown out by the Mavericks in a 130-84 road loss on Saturday. JJ Redick led the team in scoring with just 15 points, while Brandon Ingram and Jrue holiday each scored 14 points. As a team, the Pelicans shot 36 percent from the field and a horrific three of 32 from the 3-point line as they fell behind by 12 points at halftime, before getting blitzed by 40-14 in the third quarter. Lonzo Ball finished with just two points on one of nine shooting while no bench player scored more than eight points.
Looking at the betting trends, the Pistons are 3-12-1 ATS in their last 16 road games, 1-6-1 ATS in their last eight games following a win and 10-22-1 ATS in their last 33 games overall. The Pelicans are 4-9 ATS in their last 13 games following a loss of more than 10 points, 7-17 ATS in their last 24 games against a team with a losing record and 0-5 ATS in their last five games overall.
Head to head, the under is 4-1 in the last five meetings, the under is 11-5 in the last 16 meetings in New Orleans and the Pistons are 4-10 ATS in the last 14 meetings overall.
The Pistons will be looking to stay hot after turning things around with three wins in their last four outings, but they are just 2-9 on the road at the moment and just 4-10 ATS in the last 14 meetings overall. The Pelicans haven't been able buy a win over their last eight games but they will be keen to bounce back after getting embarrased on Saturday. This one could go either way, but I'm sticking with the Pistons to keep their momentum going with a narrow win against the slumping Pelicans here. 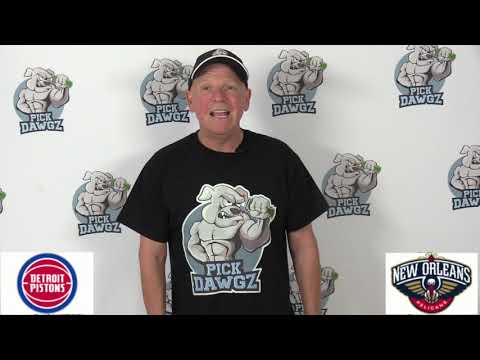