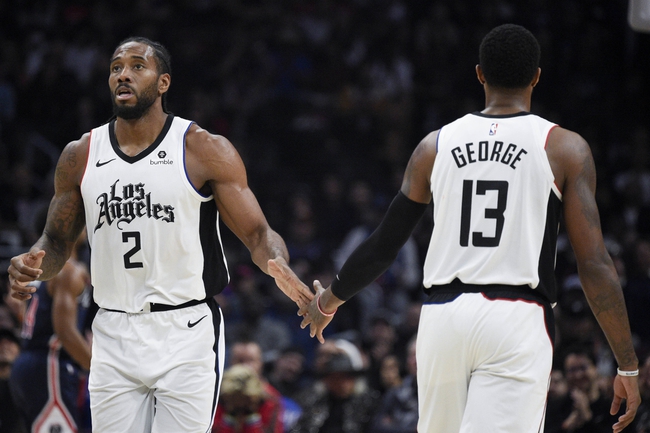 Where to Watch: NSWA, PT Stream live sports and exclusive originals on ESPN+. Sign up now!

The Los Angeles Clippers invade the Capital One Arena to battle the Washington Wizards on Sunday night.

The Los Angeles Clippers have been in great form as they've won nine of their last 11 games, but they are coming into this one looking to bounce back after falling to the Bucks in a 119-91 road loss on Friday. Kawhi Leonard led the team in scoring with 17 points, Ivica Zubac added 14 points with 12 rebounds while Paul George chipped in with 13 points. As a team, the Clippers shot 35 percent from the field and eight of 32 from the 3-point line as they showed great defense to hold the Bucks to just 22 points in the second quarter, only to get blown out in the second half where they were outscored by 67-48. The Clippers were slow out of the gates and were always trailing after the Bucks took a 15-point lead in the first quarter.

Meanwhile, the Washington Wizards have been in a slump as they've lost six of their past eight games and they will be hoping for a much-needed win after falling short against the Heat in a 112-103 road loss on Friday. Bradley Beal heated up late to finish with 23 points and eight assists, Mauritz Wagner and Davis Bertans each scored 19 points while Ish Smith chipped in with 15 points and eight assists in a rare start. As a team, the Wizards shot 42 percent from the field and 12 of 39 from the 3-point line, but they committed just 11 turnovers, which allowed them to stay in the game right till the end, until the Heat's Jimmy Butler capped off a triple-double night with a clutch 3-pointer late.

Head to head, the over is 7-1 in the last eight meetings and the Clippers are 5-1 ATS in the last six meetings.

Isaiah Thomas has been ruled out of his third straight game with a left calf strain which means that Smith will once again start in his place. The Clippers have been solid this season, but they will be aiming to improve on their road play as they've won just three of nine road games so far. The Clippers are 5-1 ATS in the last six meetings and they will be keen to bounce back after getting thrashed by the Bucks in their last outing so I'm thinking LA in a blowout.