Where to Watch: FSDT, FSIN Stream live sports and exclusive originals on ESPN+. Sign up now!

The Detroit Pistons play host to the Indiana Pacers at Little Caesars Arena on Friday night.

The Indiana Pacers have been on a tear lately as they’ve reeled off seven wins in their last eight games and they will be aiming for a third straight victory after taking down the Thunder in a 107-100 road win on Wednesday. TJ Warren led the team with 24 points on nine of 15 shooting, Domantas Sabonis added 17 points with 13 rebounds and two assists while Malcolm Brogdon chipped in with 11 points and six assists. As a team, the Pacers shot 48 percent from the field and nine of 24 from the 3-point line as they looked to be a step behind the Thunder for most of the game, until the final 2:32 where they closed the game on a 12-4 run to come away with the unlikely victory.

Meanwhile, the Detroit Pistons have been in a rut lately as they’ve lost nine of their last 13 games and they will be looking to bounce back after having their two-game win streak snapped by the Bucks in a 127-103 home loss on Wednesday. Andre Drummond led the team with 23 points, 14 rebounds, five assists and three blocks, Langston Galloway added 20 points off the bench while Blake Griffin chipped in with 16 points and 10 rebounds on four of 17 shooting. As a team, the Pistons shot just 41 percent from the field and 11 of 36 from the 3-point line as they held the Bucks to just 22 points in the first quarter, before getting blown off the court the rest of the way.

Head to head, the over is 5-2 in the last seven meetings and the Pacers are 1-4 ATS in the last five meetings in Detroit.

The Pacers have been in great form lately and it's really been impressive how balanced their scoring has been as they win without anyone having a big scoring night. The Pistons have been doing it tough lately as they're coming into this one fresh off a beating at the hands of the red-hot Bucks. The Pacers are just 1-4 ATS in the last five meetings in Detroit, but I'm going against that trend as the Pacers have been on a roll and I think they can stay hot with another road win here. 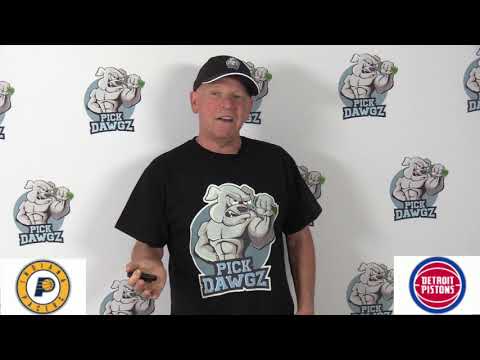