Where to Watch: FSIN, FSOK Stream live sports and exclusive originals on ESPN+. Sign up now!

The Indiana Pacers pay a visit to the Oklahoma City Thunder at the Chesapeake Energy Arena on Wednesday night.

The Indiana Pacers have been in great form lately as they've won six of their last seven games and they will be looking to stay hot after taking down the Grizzlies in a 117-104 road win on Monday. Malcolm Brogdon led the team with 19 points, six rebounds and nine assists, Domantas Sabonis added 18 points with 14 rebounds and eight assists while Myles Turner chipped in with 17 points. As a team, the Pacers shot 50 percent from the field and 16 of 38 from the 3-point line, but the real strength of the Pacers was on display again as they had seven players finish in double figures in scoring.

Meanwhile, the Oklahoma City Thunder have been in a rut as they've lost six of their past 10 games, but they will be aiming for a third straight victory after completing a home and home sweep with a 107-104 road win at New Orleans on Sunday. Danilo Gallinari led the team with 23 points, 11 rebounds and three assists, Steven Adams, Dennis Schroder and Shai Gilgeous-Alexander each scored 17 points while Chris Paul chipped in with 16 points and eight assists. As a team, the Thunder shot 46 percent from the field and 11 of 33 from the 3-point line as they trailed midway through the fourth quarter before the veteran Paul sparked a decisive 12-0 run to get the Thunder over the line.

The Thunder haven't been at their best lately, but they're starting to turn things around with back to back wins over the Pelicans. However, the Pacers have been one of the most consistent teams all season and they're getting it done with contributions from everyone on both ends of the floor. The Pacers are 4-1 ATS in their last five road games and I think they represent some decent value as the slight road underdogs in this one. 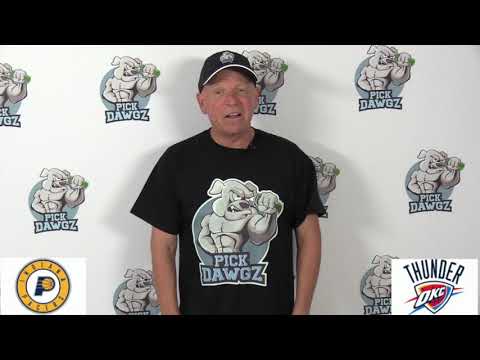