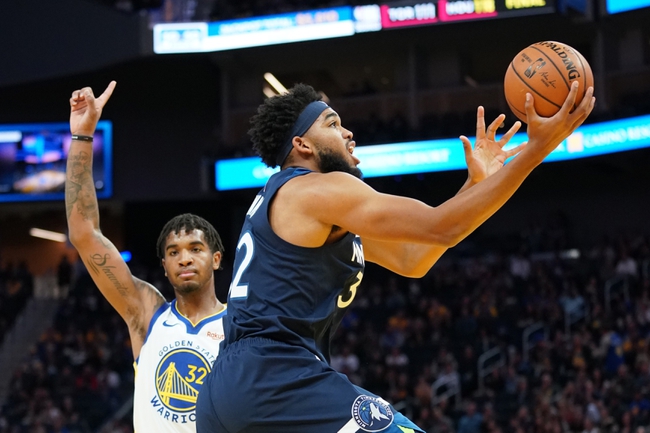 The Golden State Warriors and the Minnesota Timberwolves duke it out at the Target Center on Friday night.

The Golden State Warriors have been in a world of hurt as they’ve won just two of their first eight games and they will be hoping to bounce back after falling to the Rockets in a 129-112 road loss on Wednesday. Alec Burks led the team with 28 points on 10 of 18 shooting off the bench, Eric Paschall added 19 points while Glen Robinson III chipped in with 15 points and 11 rebounds. As a team, the Warriors shot 39 percent from the field and 13 of 33 from the 3-point line as they kept pace with the Rockets in an inspired first quarter effort, before getting blown out in the second and third quarters by a combined 68-44.

Meanwhile, the Minnesota Timberwolves have cooled off from their three-game win streak as they’re now hoping to avoid a third straight defeat after falling to the young Grizzlies in a 137-121 road loss on Wednesday. Andrew Wiggins led the team with 30 points and six assists, Karl-Anthony Towns added 25 points with 13 rebounds and two blocks while Jarrett Culver chipped in with 15 points and seven assists. As a team, the Timberwolves shot 44 percent from the field and 16 of 45 from the 3-point line as they poured in a combined 70 points in the second and third quarters to rally back from an early hole, only to fall short in the fourth quarter where the Grizzlies poured in 36 points behind stellar play from Ja Morant and Dillon Brooks.

Jeff Teague is currently listed as questionable for Friday, but he likely won’t be required for the Timberwolves to get past this unrecognizable Warriors lineup. The Warriors have shown that they’re capable of winning without their superstars as the Trailblazers found out a few nights ago, but that was in front of a packed home crowd. With this game being at the Target Center, I like the Timberwolves to get back on track with a win and cover here.