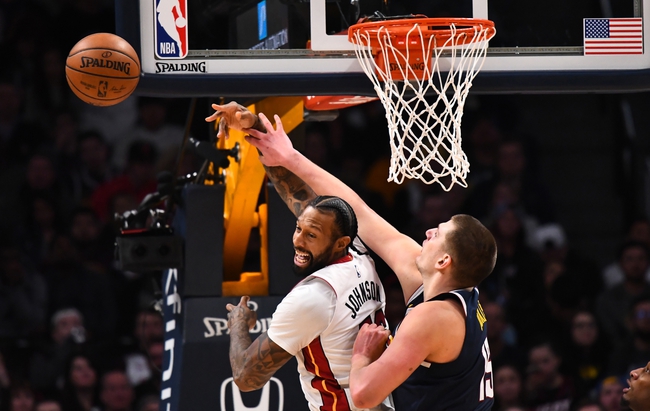 Where to Watch: AL2, SUN Stream live sports and exclusive originals on ESPN+. Sign up now!

The Denver Nuggets and the Miami Heat duke it out at the Pepsi Center on Tuesday night.

The Miami Heat have been one of the form teams of the league as they’ve won five of their first six games and they will be aiming for a fourth straight victory after making light work of the Rockets in a 129-100 home win on Sunday. Duncan Robinson drained seven 3-pointers to lead the team with 23 points, Meyers Leonard added 21 points on nine of 11 shooting while Jimmy Butler chipped in with 18 points, seven rebounds, nine assists and four steals in just 27 minutes of action. As a team, the Heat shot 52 percent from the field and 18 of 41 from the 3-point line, but this game was over before halftime as the Heat stormed out of the gates to lead by as many as 41 points early in the second quarter.

Meanwhile, the Denver Nuggets have endured an inauspicious start to the season, but they will be feeling a little better after snapping a two-game skid with a 91-87 road win over the Magic on Saturday. Jamal Murray led the team with 22 points, Nikola Jokic added 20 points while Gary Harris chipped in with 13 points and four assists. As a team, the Nuggets shot just 37 percent from the field and nine of 28 from the 3-point line as their offensive struggles continued, but they played great defense to hold the Magic to just 37 points in the second and third quarters combined while outscoring them at the free throw line by 28-7. With the much-needed win, Denver improved to 4-2 on the season and 3-1 on the road.

The Nuggets will be breathing a major sigh of relief following their much-needed win over the Magic, but they were far from convincing which could be good news for a confident Heat squad coming off a blowout win over the Rockets. The Heat are 11-4-1 ATS in their last 16 road games, they're playing great team basketball and I just feel they're catching the Nuggets at the right time as the Nuggets seem a little disjointed this season with players like Jokic and Murray yet to turn it on. With that being said, I like the Heat to pull off the upset here in a close one.