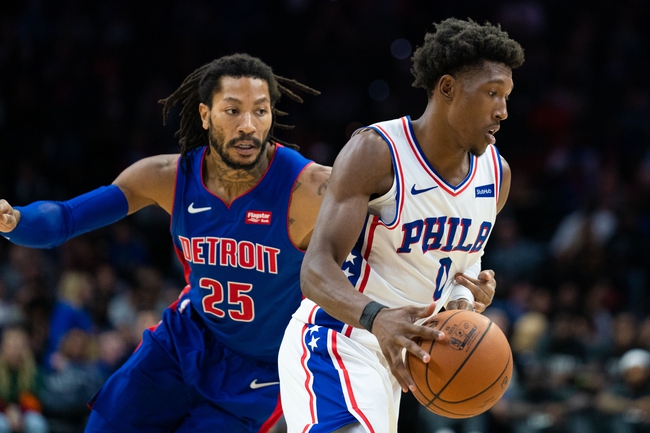 Where to Watch: FSDT, NSPA Stream live sports and exclusive originals on ESPN+. Sign up now!

The Philadelphia 76ers travel to Little Caesars Arena to battle the Detroit Pistons on Saturday night.

The Philadelphia 76ers will be gunning for a second straight win to start their season after taking down the Celtics in a 107-93 home win on Wednesday. Ben Simmons led the team with 24 points, eight rebounds and nine assists on 11 of 16 shooting, Josh Richardson added 17 points while Joel Embiid added 15 points with 13 rebounds and three blocks. It wasn't the prettiest of games as the 76ers shot just 43 percent from the field and seven of 29 from the 3-point line, but they were able to find easy buckets in the key moments while playing stellar defense to hold the Celtics to just 36 percent shooting from the field.

Meanwhile, the Detroit Pistons will be looking to rebound from their first loss of the season after falling to the Hawks in a 117-100 home loss on Thursday. Derrick Rose led the team in scoring with 27 points in just 25 minutes off the bench, Andre Drummond added 21 points with 12 rebounds and four steals while Luke Kennard chipped in with 13 points but no other player scored more than eight points. As a team, the Pistons shot just 41 percent from the field and 10 of 37 from the 3-point line, but their offense sputtered in the second half where they were outscored by 57-37.

Blake Griffin is set to miss the first week of the regular season so he won't be ready for this one which is a big loss for a Pistons team that has looked lost on the offensive end. The 76ers didn't look like a well-oiled machine themselves, but Simmons was able to spark the team to get past the Celtics in their season opener. The 76ers are 7-1 ATS in the last eight meetings and I think that trend continues as they should have more than enough firepower to take care of the shorthanded Pistons.