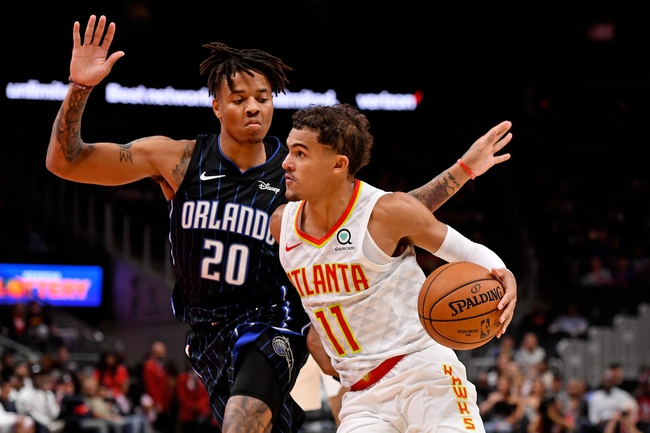 Where to Watch: FSFL, FSSE Stream live sports and exclusive originals on ESPN+. Sign up now!

Trae Young and the Atlanta Hawks play host to the Orlando Magic at the State Farm Arena on Saturday night.

The Orlando Magic will be aiming for a second straight win to start their season after taking down the Cavaliers in a 94-85 home win on Wednesday. Nikola Vucevic led the team with 21 points, 10 rebounds and three assists, Evan Fournier added 16 points while Markelle Fultz chipped in with 12 points and six assists in 23 minutes off the bench. As a team, the Magic shot 43 percent from the field and nine of 30 from the 3-point line which aren't gaudy numbers, but they were solid on the defensive end as they held the Cavaliers to just 41 points in the first half to give them a double-digit cushion.

Meanwhile, the Atlanta Hawks will be looking to stay undefeated as well after making light work of the Pistons in a 117-100 road win on Wednesday. Trae Young led the team with 38 points, seven rebounds and nine assists while John Collins and Jabari Parker each scored 18 points. As a team, the Hawks shot a healthy 51 percent from the field and 11 of 31 from the 3-point line as they rode the hot hand of Young from start to finish. Cam Reddish had a rough NBA debut as he missed all six field goal attempts to finish with just one point in 21 minutes.

The Magic looked unconvincing in their win over the Cavaliers in their season opener, but they are a solid 4-0 ATS in the last four meetings against the Hawks. Young looks to have hit the ground running as he drained six 3-pointers on Wednesday, including one from the logo, but you just get the feeling it's a risky proposition when your offense is so heavily reliant on Young. I'm tempted to take the Hawks at home, but I'm sticking with the more solid Magic to take care of business behind a big game from Vucevic in this one.