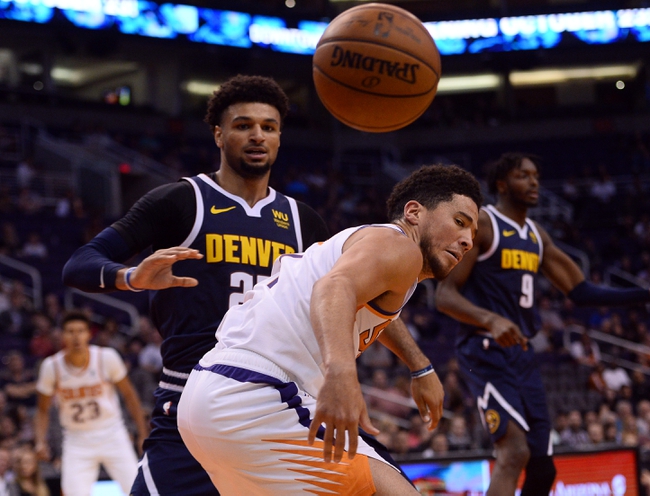 Devin Booker and the Phoenix Suns invade the Pepsi Center to battle the Denver Nuggets on Friday night.

The Phoenix Suns will be aiming for a second straight win to start the season after they were able to make light work of the Kings in a 124-95 home win on Wednesday. Devin Booker led the team with 22 points and 10 assists, Kelly Oubre Jr. added 21 points with nine rebounds, DeAndre Ayton scored 18 points while Ricky Rubio racked up 11 points with 11 assists and four steals in his debut. As a team, the Suns shot a healthy 50 percent from the field and 11 of 33 from the 3-point line as they did most of their damage in a dominant second half where they outscored the Kings by an impressive 70-36.

Meanwhile, the Denver Nuggets will be aiming for their first home win of the season after taking care of business against the Trailblazers in a 108-100 road win last night. Nikola Jokic was plagued with foul trouble, but still managed to finish strong to lead the team with 20 points, 13 rebounds and two assists. Will Barton added 19 points while Jamal Murray chipped in with 14 points and six assists, but in a game that was tightly contested throughout, the Nuggets couldn't pull away until late in the fourth quarter where they went on a decisive 10-2 run sparked by Jokic.

The Suns looked great in their win over the Kings on Wednesday, as did the Nuggets who rallied to get past the Trailblazers despite Jokic playing just 24 minutes. The Suns are just 3-10 ATS in the last 13 meetings overall and 1-6 ATS in the last seven meetings in Denver, so it's no surprise that the line is so hefty. However, the Suns really do look like a better team on offense with a floor general like Rubio running the point guard slot, so I'm taking the Suns with the points in what should be a shootout.