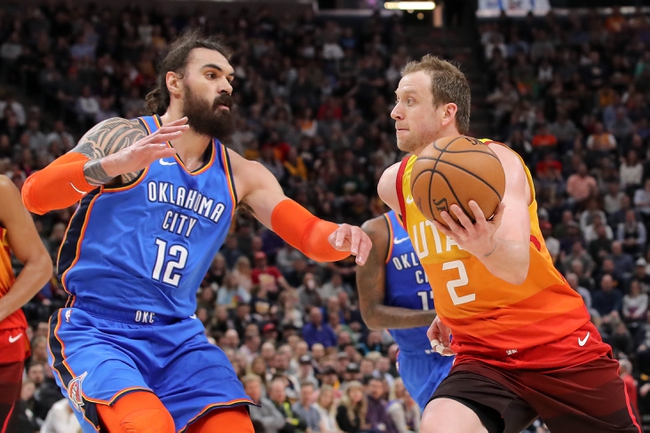 Where to Watch: FSOK Stream live sports and exclusive originals on ESPN+. Sign up now!

The Oklahoma City Thunder kick off their season with a visit to the Vivint Smart Home Arena to battle the Utah Jazz on Wednesday night.

The Oklahoma City Thunder will be hoping to move into a full rebuild after winning 49 games last season on the back of Russell Westbrook and Paul George who are now both playing in different uniforms. Chris Paul was the big piece in the trade, and you get the feeling the Thunder will go as far as he can take them along with Steven Adams, but I’m not expecting too much as Paul hasn’t played more than 61 games in each of the last three seasons. There’s also always the chance that Paul gets traded away to a contender, but unlikely given his hefty contract.

Meanwhile, the Utah Jazz will be aiming for a better season after losing to the Rockets in the first-round last season. In an attempt to improve their perimeter scoring, the Jazz replaced Ricky Rubio with Mike Conley which shifts Donovan Mitchell to the shooting guard position. The Jazz were also able to sign Bojan Bogdanovic to replace Derrick Favors which leaves them with a solid starting lineup with Rudy Gobert and Joe Ingles completing the balanced lineup.

It’s hard to be too optimistic about the Thunder who are probably still dealing with the shock of losing Paul George to the Clippers, but they’re not a terrible team if Paul is healthy. I felt Rubio played well for the Jazz last season, but they upgraded with Conley at the point which could liberate Mitchell to take the next leap in his progression. The Thunder are 5-1 ATS in the last six meetings overall but with the roster overhaul, I’m leaning towards the Jazz to kick off their season with a solid win and cover at home.