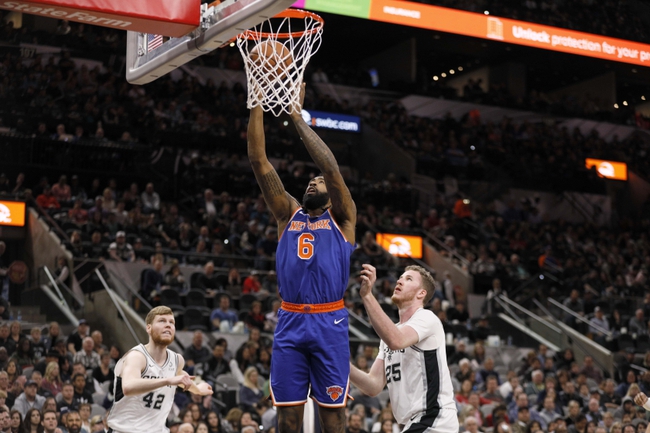 Where to Watch: KENS, MSG Stream live sports and exclusive originals on ESPN+. Sign up now!

The New York Knicks haven’t made the playoffs in a while and lost their free agent targets to the team across town, so expectations aren’t all that high for the Knicks. Shocker, shocker. However, David Fizdale isa really good coach and will have this team prepared and in good shape. And while there’s no Kyrie or Durant on this roster, Julius Randle is a solid player who could thrive in this system, while Marcus Morris, Taj Gibson and Wayne Ellington are consistent contributors. It’s going to be fun to track the process of Dennis Smith Jr. and Kevin Knox, and of course there’s promising rookie RJ Barrett. The Knicks could be better than expected this season. The New York Knicks have lost 10 of their last 12 road games.

The San Antonio Spurs haven’t missed the playoffs since the 1996-97 season, so even when oddsmakers aren’t high on them, it’s best to pencil them in for a solid season and probably take the over on the win total. The Spurs get another season of DeMar DeRozan and LaMarcus Aldridge, but it’s the return of Dejounte Murray that can really help take this team above what it accomplished last season. One of the most promising young point guards in the game, Murray returning adds playmaking ability to the floor and allows Derrick White and Patty Mills to slide back in their regular roles and takes pressure off the entire backcourt. Until Gregg Popovich decides to hang it up, the Spurs are always going to be a tough out no matter what you may think of their roster. The San Antonio Spurs have won 10 of their last 12 home games.

The New York Knicks have failed to cover each of their last nine games as an underdog of at least five points. So while I think the Knicks will be better than most people think, it's hard to back them in the underdog role based on how badly they've burned bettors in these exact same spots. The San Antonio Spurs are deeper than they were a year ago with the return of Murray, and they're that consistent team that usually beats up on the teams they're supposed to beat up on. There's better options for Wednesday's card, but I'll lay the chalk with the Spurs if forced to pick.