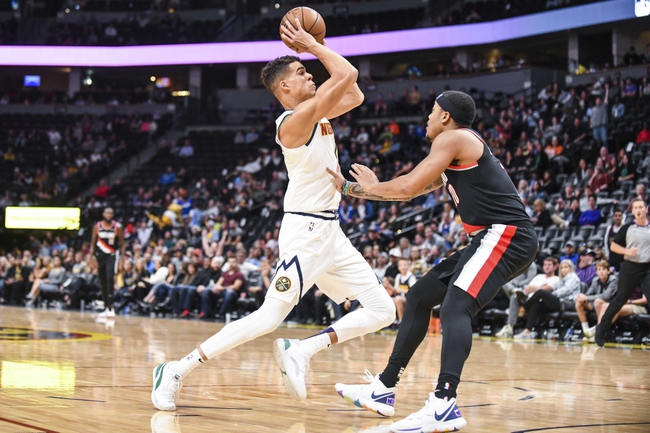 The Denver Nuggets and Portland Trail Blazers meet Wednesday in NBA action at the Moda Center.

The Denver Nuggets are coming off one of their best seasons in franchise history and hope to take that next step with a conference finals trip. The Nuggets are built for longterm success with a core of Jamal Murray, Gary Harris, Will Barton and Nikola Jokic, and they’ll do most of the heavy lifting if the Nuggets are going to build on what they did last year. However, the addition of Jerami Grant adds more depth to an already talented Denver roster and the emergence of Michael Porter Jr. could be massive, as he has possible all-star written all over him if he stays healthy. The Denver Nuggets are a fun team to watch and there’s no reason why they can’t push every other team in this league yet again. The Denver Nuggets have lost five of their last six road games.

The Portland Trail Blazers are coming off a western conference finals appearance and are now thinking possible NBA title with a wide open league. A duo of Damian Lillard and CJ McCollum makes for one of the best backcourts in the league, but it’s always been the lack of depth that sells Portland short. A full season of Rodney Hood should remove some of hat pressure and Zach Collins is quickly making a case as the third best player on this team. Having Kent Bazemore coming off the bench could also be huge, as he adds much needed shooting when one of those star guards comes off the floor. The Portland Trail Blazers may still have depth issues, but they have to like where they’re at nonetheless. Hassan Whiteside and Nassir Little are questionable with injuries. The Portland Trail Blazers have won their last eight home games.

The Portland Trail Blazers have won five of the last eight meetings against the Denver Nuggets, and the home team has won seven of the last 10 meetings. Before betting this game, you should check to see if Whiteside is going to play, as already being down Jusuf Nurkic, the Trail Blazers would have no size to control Jokic if they're down both of their centers. Still, I'm leaning toward the Trail Blazers and the small chalk simply because of home court. This early in the season and with a matchup this big where both teams will be out to make an early statement, home court could be the deciding factor and the Moda Center is one of the tougher places in the league to play.