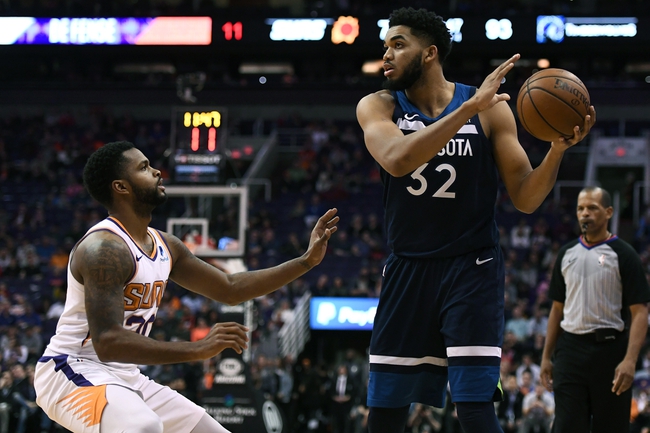 Where to Watch: None Stream live sports and exclusive originals on ESPN+. Sign up now!

The Minnesota Timberwolves hope for a bounce back season, as there’s really no excuse for them to be as bad as they were a year ago with a lot of the talent that’s on this roster. Of course, unlike last season, the Timberwolves won’t have the drama they had this time a year ago with the Jimmy Butler saga. That’s a positive as Minnesota gears up for five exhibition games over these next two weeks. Two players to keep an eye on for the Timberwolves are Jarrett Culver and Noah Vonleh, two guys who could contribute at a high level off the bench from the beginning of the season. Jordan Bell will miss this game due to a calf injury. The Minnesota Timberwolves have lost five of their last six preseason games.

The Phoenix Suns enter the preseason as one of the more banged up teams in the league. Jalen Lecque, Aron Baynes, Tyler Johnson, Mikal Bridges and Kelly Oubre are are injured in some shape or form and probably won’t be participating in this contest. That leaves a rather short roster to work with in meaningless play, but we will get to see Ricky Rubio in an orange jersey for the first time and it’s always a treat to see Devin Booker on the hardwood. Jevon Carter is a defensive specialist who could carve a place in this league despite a lack of shooting, and Cameron Johnson is a walking bucket who could thrive in this up-tempo offense. The Phoenix Suns have split their last six preseason games.

The Minnesota Timberwolves have to prove they're a different team from last season before I can get behind them with any confidence. The Phoenix Suns are one of the more banged up teams in the league right now, but the offensive system is still up tempo and they still have guys who can make shots. In preseason games where guys don't go all out, the Suns could provide some value and light up the box score. I'll take a shot with the Suns at home and the free bucket.