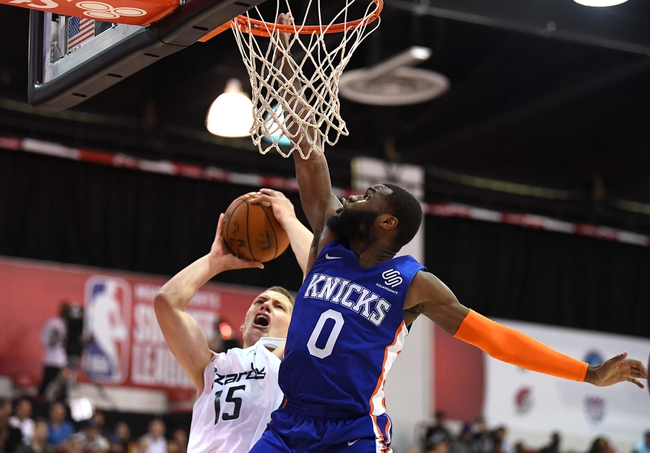 The New York Knicks and Washington Wizards meet Monday in NBA preseason action at the Capital One Arena.

The New York Knicks have a revamped roster and hope they can see some sort of progress. All eyes will be on rookie RJ Barrett, who is the one glimmer of hope this franchise has and there’s a lot of expectations on him to be the needed building block. Experienced players such as Julius Randle, Bobby Portis and Elfrid Payton are key as well, as they bring toughness and attitude and could help change the culture. I’m also intrigued to see the progress Allonzo Trier has made, as players usually make that leap in their second season. Kadeem Allen and Dennis Smith Jr. will not play in this game due to injuries. The New York Knicks have lost seven of their last 10 preseason games.

The Washington Wizards are probably the most banged up team heading into the preseason, which doesn’t exactly bode well for expecting a turnaround from last year. In terms of consistent players, it’s still Bradley Beal by himself, and while he’s great, he can’t do everything on his own. There’s just not a lot to like with this Wizards roster, especially for this game when you factor in the injuries. The one player to watch this preseason is rookie Justin Robinson, a player who can get hot from deep and could provide instant offense to take pressure off the Wizards star shooting guard. Admiral Schofield and Isaac Bonga are questionable for this game due to injuries. The Washington Wizards have won eight of their last 10 preseason games.

I don't care if it's preseason or not, I'm not laying chalk with the Washington Wizards, a one-man team that's going to lose a lot of games this season. The New York Knicks didn't land the big fish everybody wanted in the offseason, but they did add some depth and guys who can play. There's also some young talented guys who will be out to earn their stripes. The Wizards shouldn't be laying chalk to anybody in this league. Give me the Knicks and the free bucket.